There are two ways to get to Cuzco from Lima, the Backpacker way which requires 25+ hours on a bus or the sane way which is a short hour and half flight.

Scratch that, we have decided to avoid riding buses are much as possible.  That’s one thing that makes us different that your average backpacker, while we do try to save money as much as possible there are certain things we justify splurging for.  Since hours on a bus take away from both seeing and experiencing culture and time that Tom could be working we choose to fly when possible.

Our tickets cost $200 a piece round trip and saved us 2 days of our lives.

The trip to the airport was our first of 2 online booked failures in Peru.  (The second one involves Machu Picchu but I’ll get to that in my next post.)

We arrived at the airport, confirmation code in hand only to be told that the website hadn’t actually booked our tickets.  Luckily we had arrived at the airport plenty early, this was an easy fix, and 30 minutes later we were walking through security on the flight we originally planned to be on. 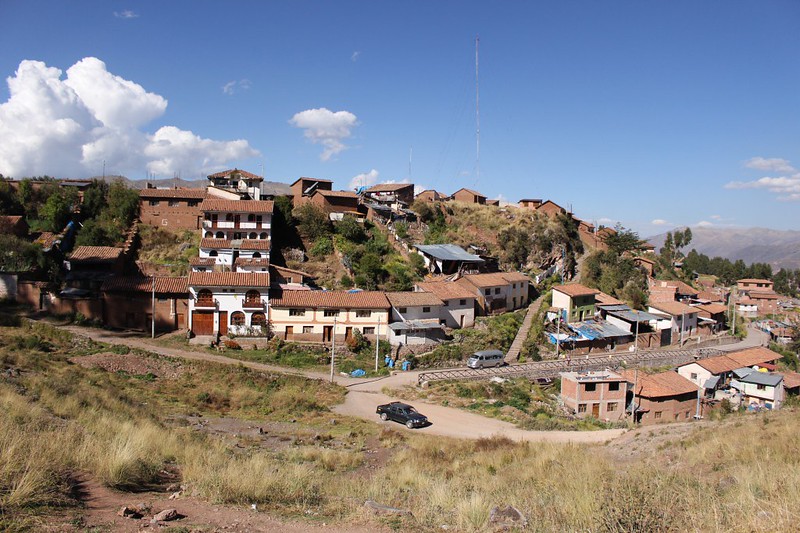 Landing in Cuzco you immediately feel the altitude.

The city sits at 3,399 m (11,152 ft) which is more than twice as high as Denver, CO.  (As an “interesting” traveler we met would say Cuzco’s always high!)  Tom and I attempted to run a couple days and were pretty ashamed at how hard less than 2 miles felt.

Getting into town was a 14 soles ($3.5) cab ride and as we were driving in Tom and I realized we were hitting our South American groove! 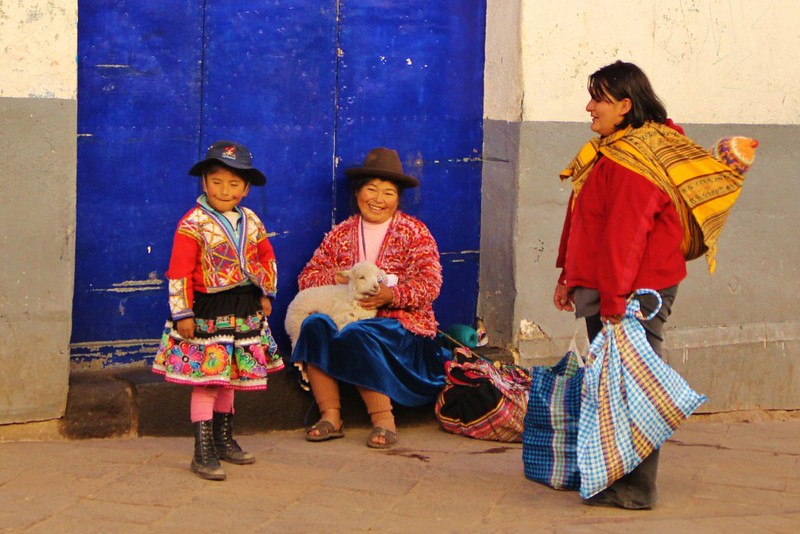 Yes this woman is holding a lamb. 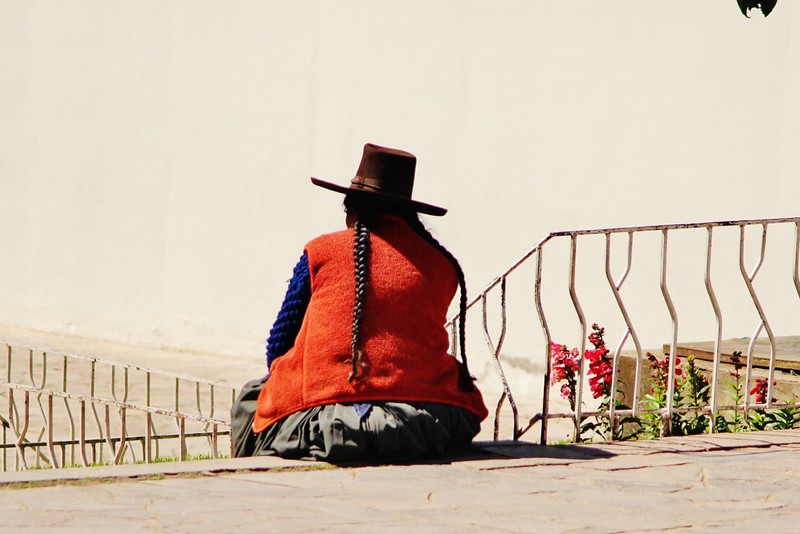 Argentina and Chile were fun, but they lacked the character we immediately saw in Cuzco.

Cuzco is a city full of colors!  Peruvian Aztec fabrics are everywhere.  The Cuzco flag is a rainbow.  Souvenir stalls line the streets or women set up shop on the street with vibrantly colored hand made hats, gloves, and sweaters from llama wool.

It’s crazy to watch how quickly the women can pack up their entire “shop,” (read items laid out on a blanket) throw it on their backs, and head to the next sidewalk at any sign of a cop.  Apparently those who set up shop without an actual shop are working illegally. 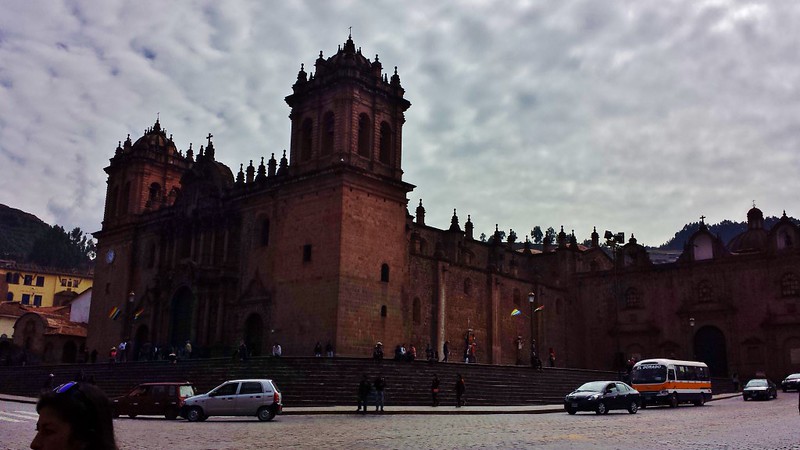 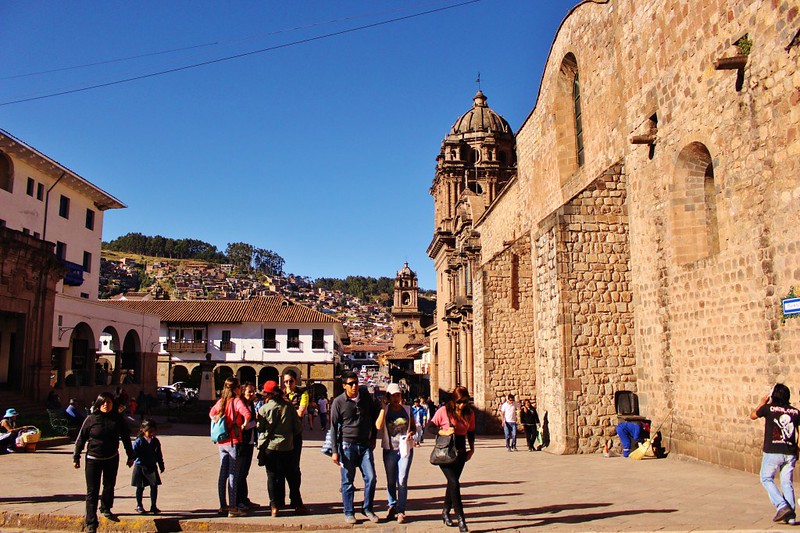 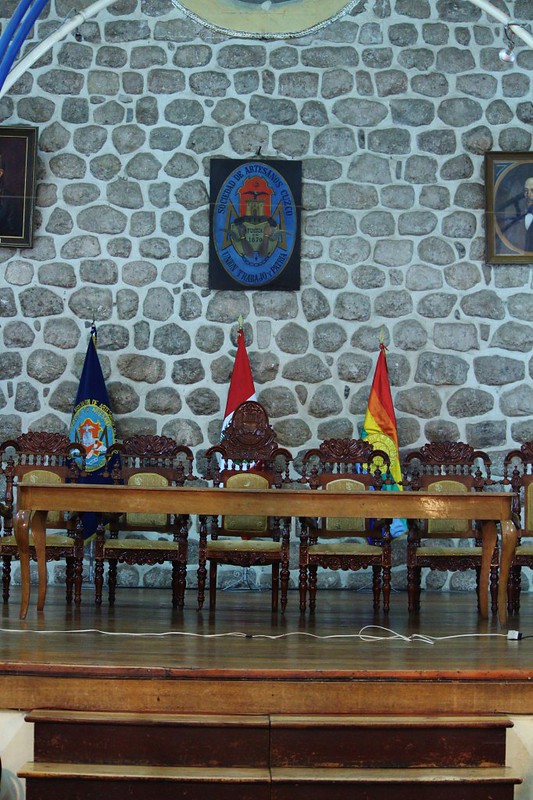 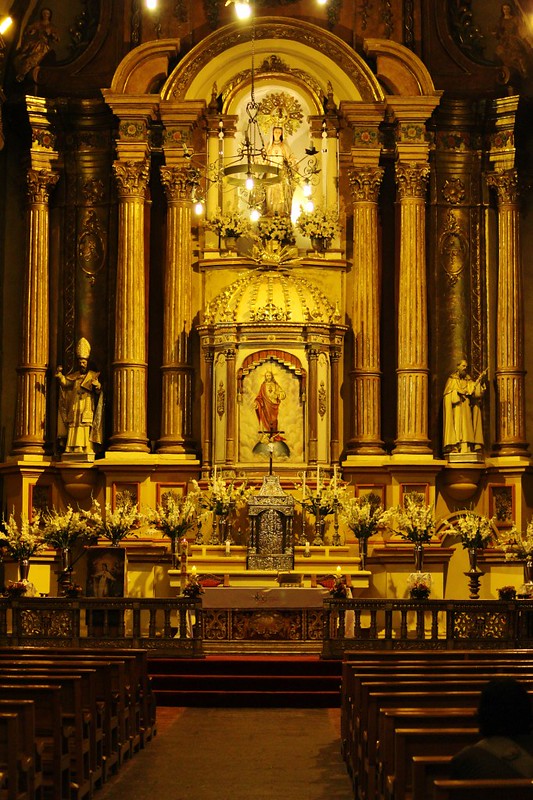 It’s definitely a touristy city (there is a Starbucks and it has great WIFI!) and you should be prepared to be bombarded with people selling you tours, art, and whatever else they happen to be offering at the time; but there is also a lot to do. 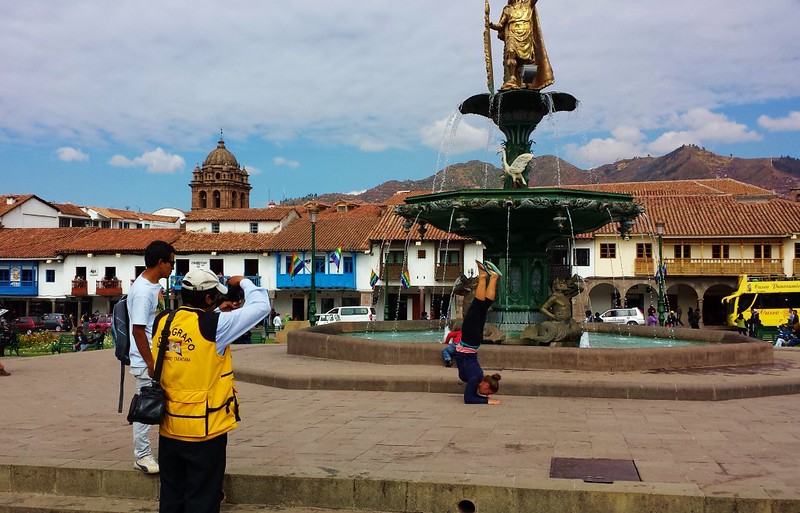 The San Pedro Market is a definite must!

You can find everything there from souvenirs to cheese, fresh squeezed juice, flowers, frogs, san pedro cactus–a legal hallucinogenic, whole chickens, and even a hand tailored suit. 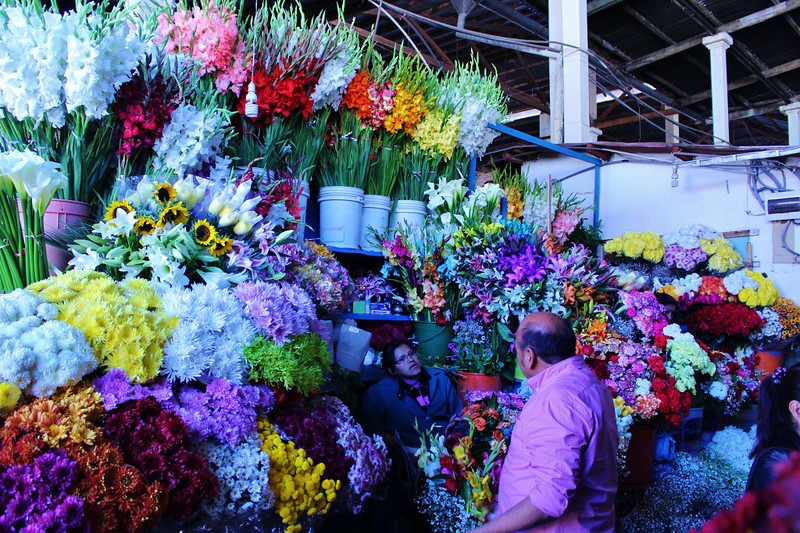 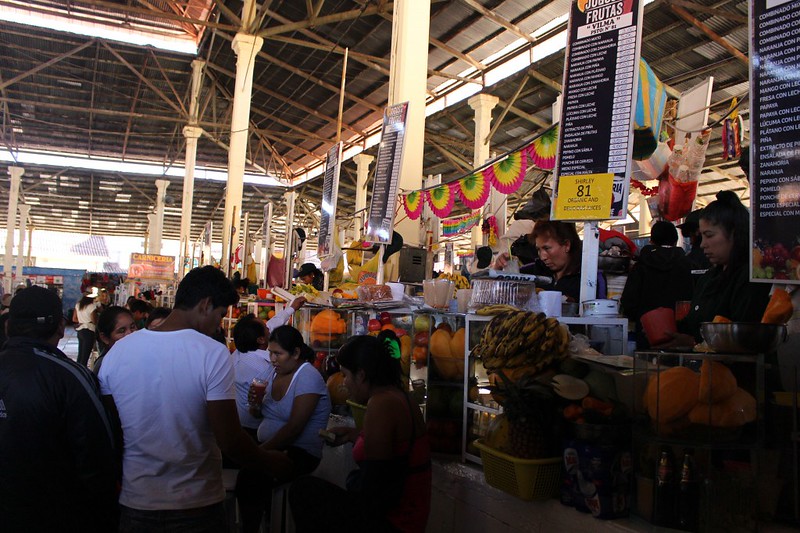 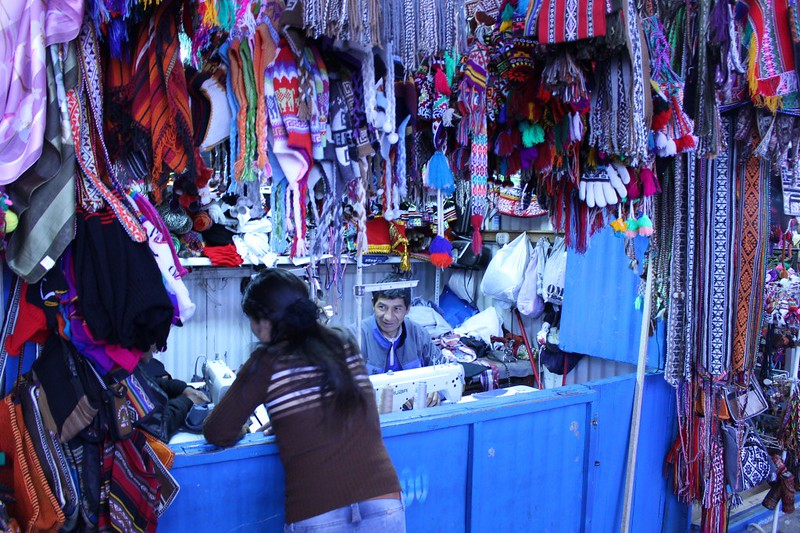 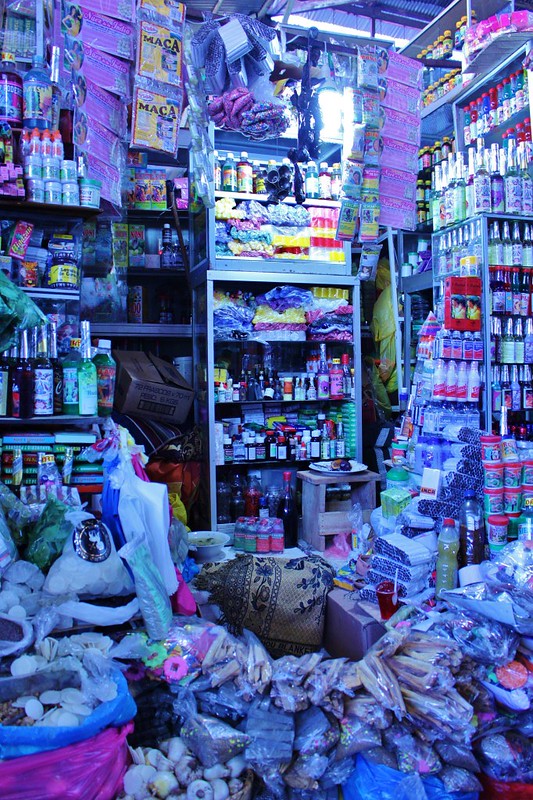 Incense, San Pedro, Cigarettes, Oils, You Name it this stall has it. 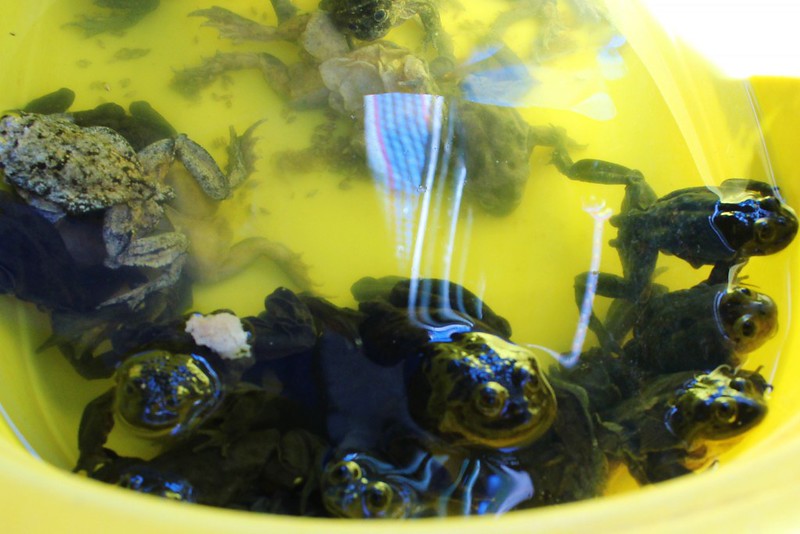 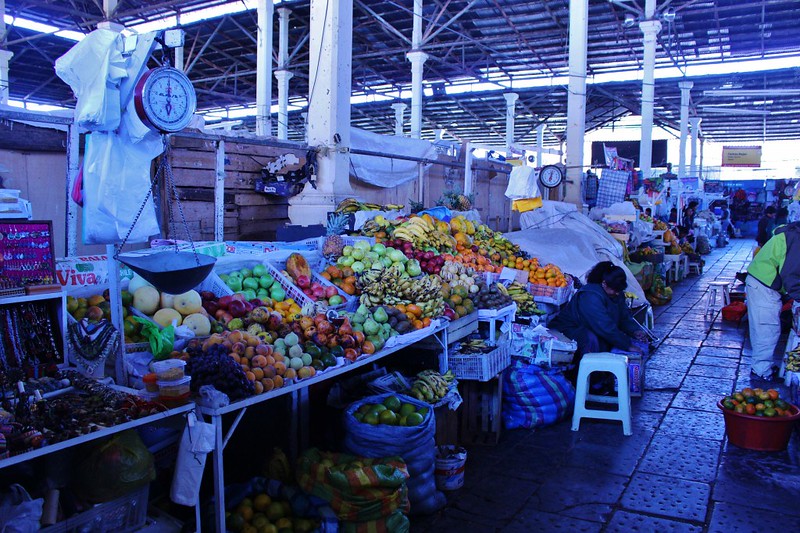 The San Pedro Market may have some souvenirs, but the best ones we found down an ally at a crafts market closer to the Plaza De Armas…Seriously though, if you have trouble finding souvenirs in Cuzco then you need to explore a little more because they are impossible to miss!

There are no set prices and the first price you hear is marked up by at least 25% but sometimes you just don’t feel like negotiating.

I found a stitched ring I loved and gave the girl her asking price of 5 soles, which is a huge rip off when Tom was able to negotiate his llama’s wool hat down to 11 soles.  Oh well I’m not worried.

The thing that would worry me though is the bartering the restaurant owners do to get you to dine at their establishment.

All restaurants had 2 menus.  The normal menu with items priced around 25 soles an entree and a touristo menu that was typically 15 soles and included your choice of app, entree, dessert, and drink from a set list.  The touristo menus were often tasty and a good deal, but Tom and I refused to eat at any restaurant that would lower it’s price as you walked away…it just didn’t seem right to be that cheap about what we ate, especially since Peruvian food was already doing a number on my digestive tract. 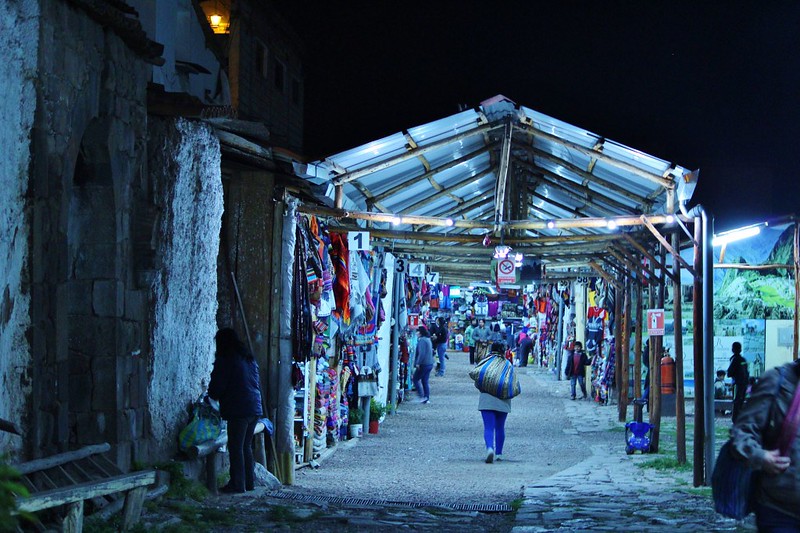 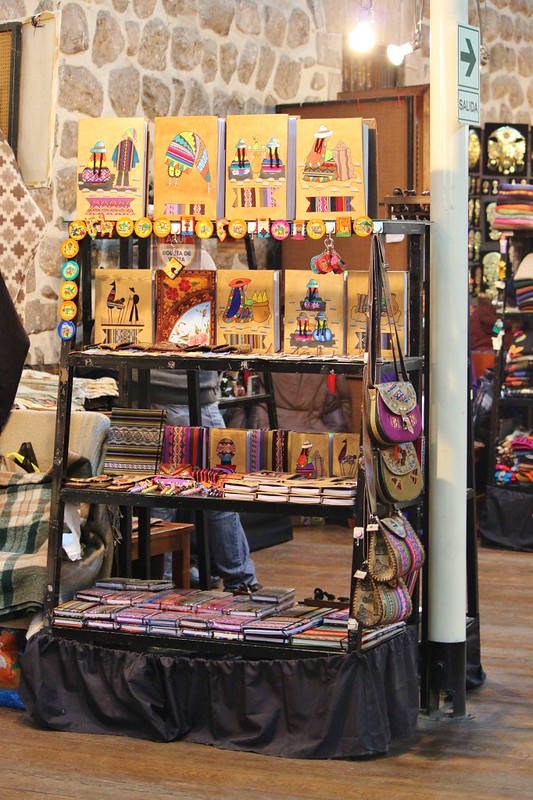 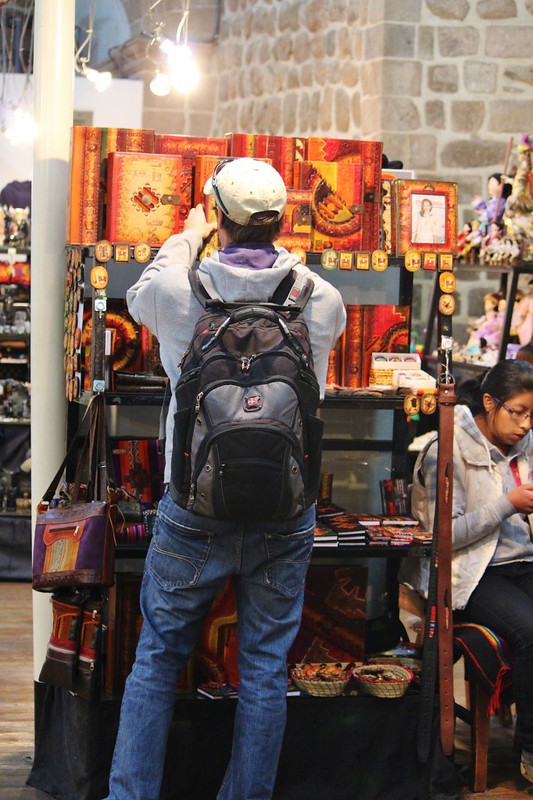 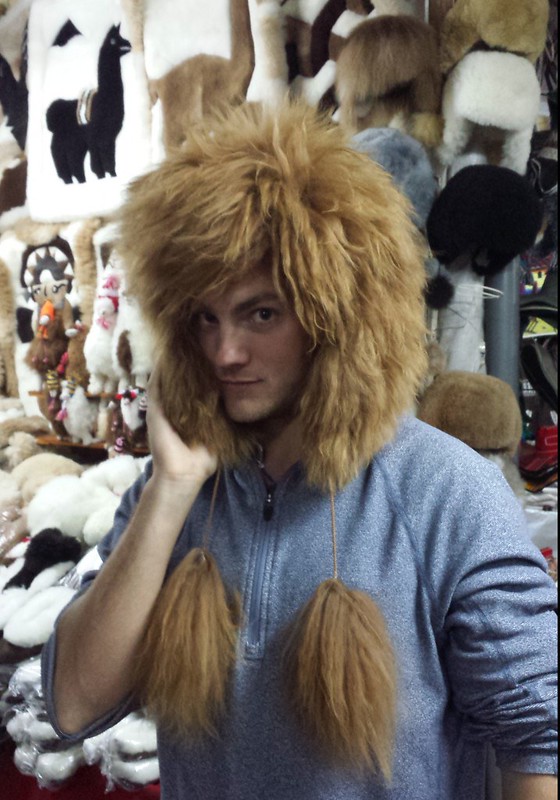 The best buy of the trip

There are day trips galore to be had from white water rafting to Machu Picchu to other temples closer to Cuzco.  For 130 soles you can buy a boleto touristico which gets you into many of the museums and ruins within the city.

We chose not to get a a boleto touristico and instead spent a day visiting the only free ruins in town, la templo de luna or the Temple of the Moon.  One of Tom’s boxing buddies from Westpoint, Steve, met up with us in Cuzco and when he arrived we headed up.  To get there have a taxi drive you past Saqsaywaman near the white Jesus to Qenqo.  From Qenqo, it’s a short 10 minute walk and locals will direct you where to go.

There we enjoyed walking around the ruins, llama watching, and laying in the sun watching hippie ladies dance to panpipes.  We took our time walking down towards town to stop by Christo Blanco. 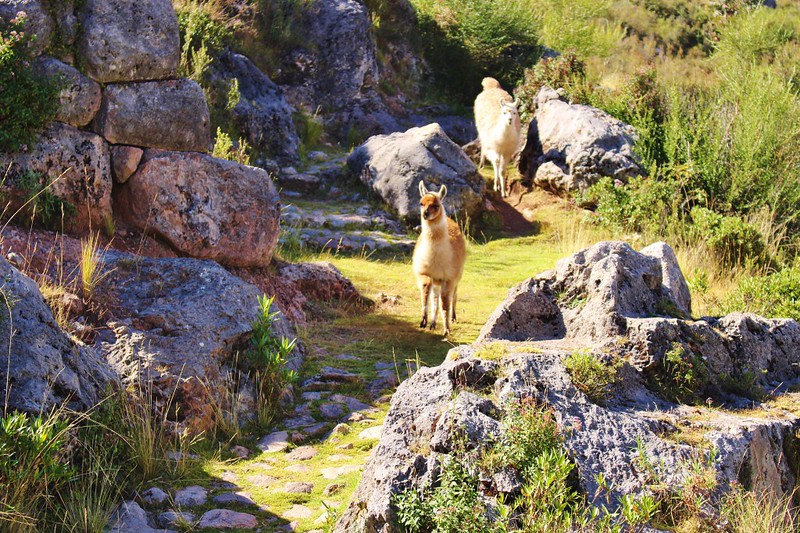 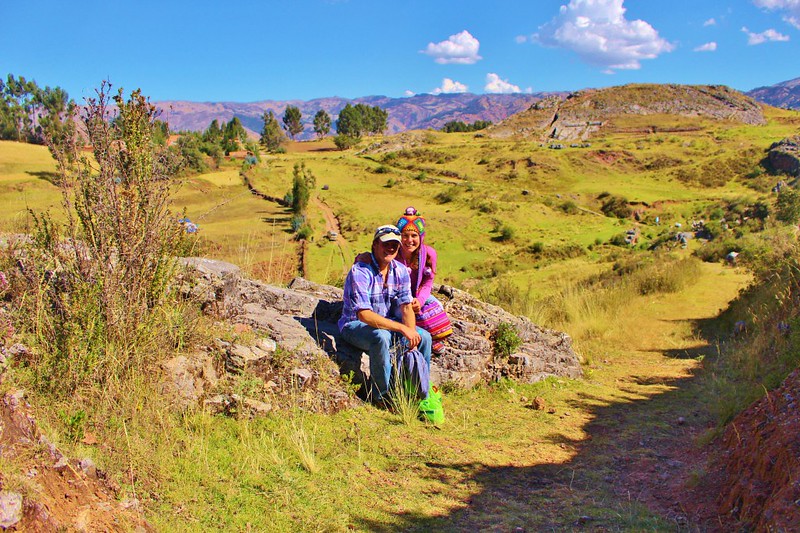 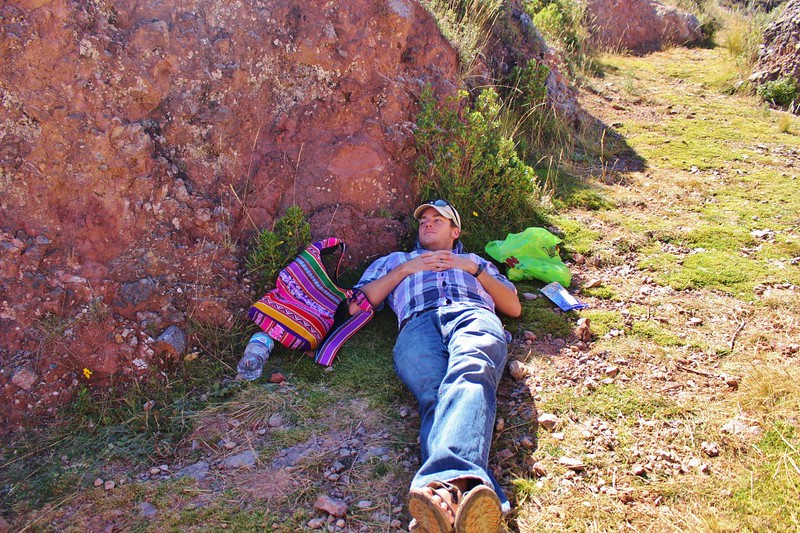 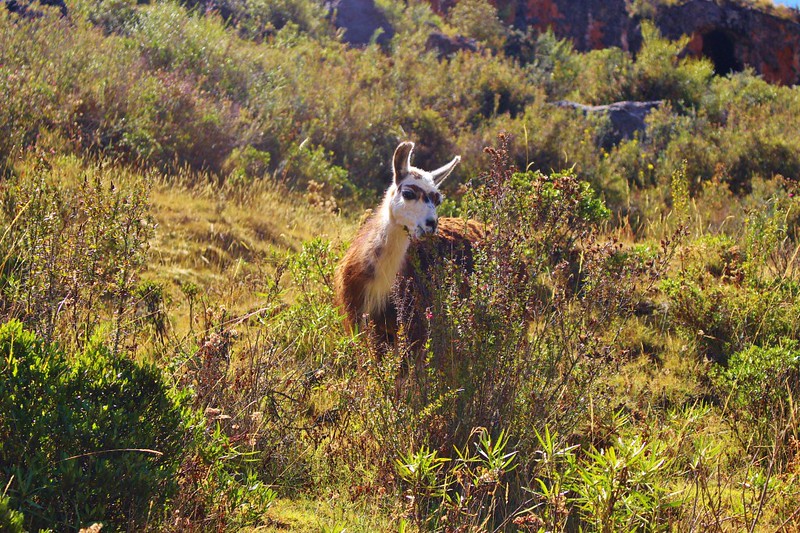 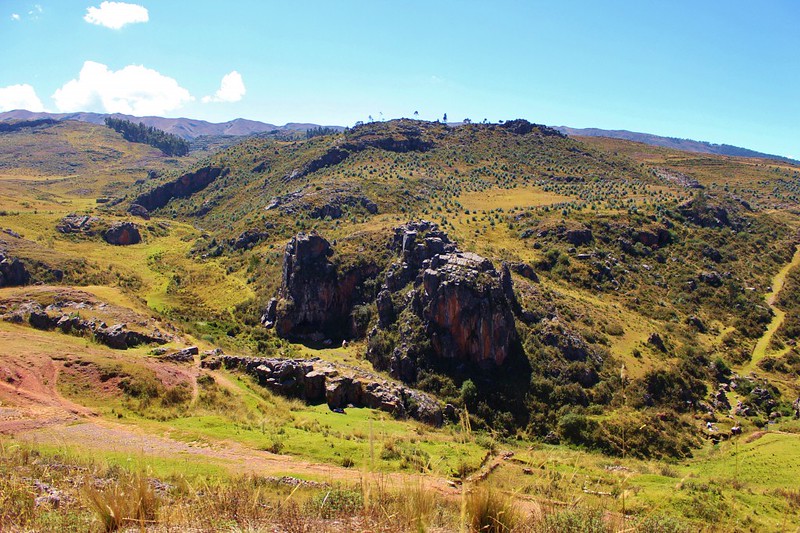 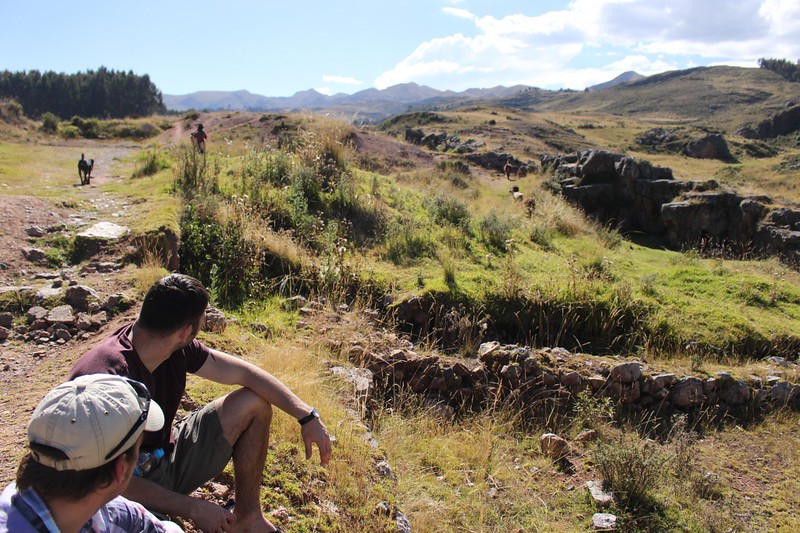 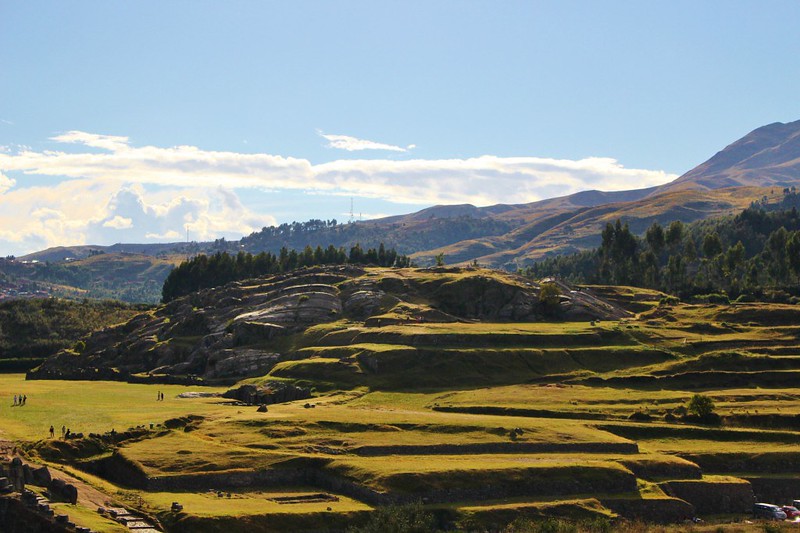 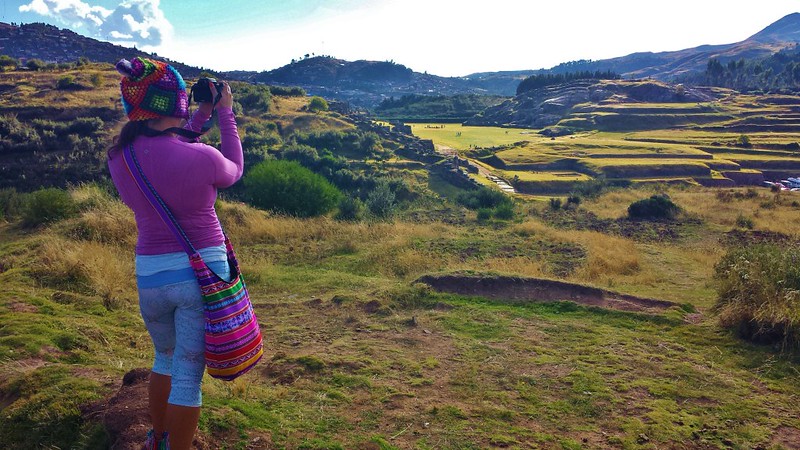 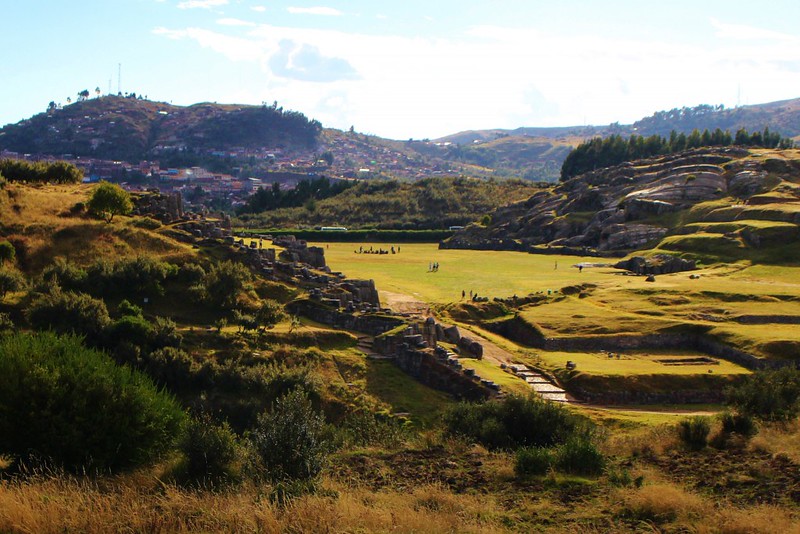 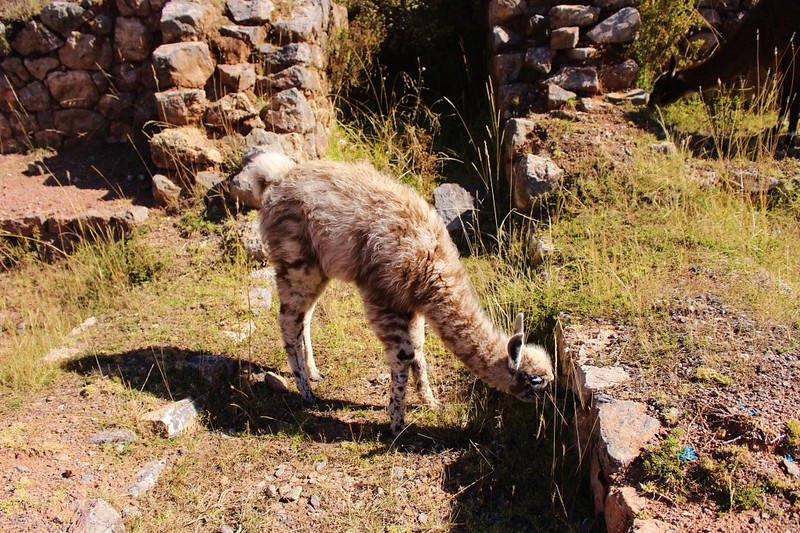 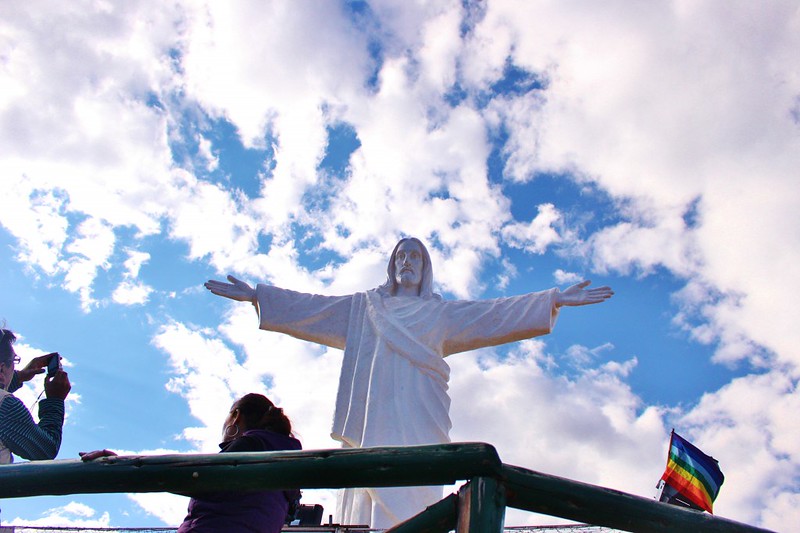 It’s definitely not hard to find accommodations in Cuzco.  There are hostels and hotels all over the city.

We stayed the VIP hostel.

It was a pretty standard hostel just a couple blocks from the Plaza de Armas but far enough away that it was super quiet.  It was also right across the street from one of the few super markets in town which was nice.  Our private room was $35 dollars a night and came with free breakfast that included an egg omelet! 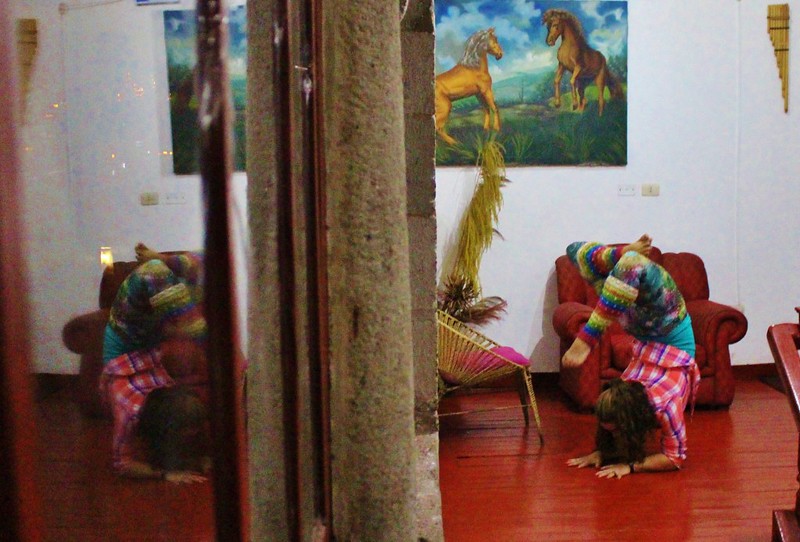 Mucking Around in the VIP hostel

Most probably come to Cuzco on their way to Machu Picchu, but it’s definitely a cool place all on it’s own.

If you are planning a visit, I definitely recommend giving yourself a couple days to enjoy Cuzco!