After a wonderful week on Gili Air, it was time time to continue on our journey.

As I mentioned in my post on Gili Air, getting there isn’t the easiest task but luckily getting off is slightly easier and cheaper.

Being on the island for a couple days allows you the luxury of being able to go to the ferry terminal to find out their timetables, but even that proved to be easier said than done.

Woman walking down the streets of Kuta, Lombok

We’d been told the afternoon ferry normally departs from Gili Air to Bangsal, Lombok at 3PM, but when we went to verify this ourselves we were told to be there by 1:45 because the boat can leave anytime between 2 and 3.

When we finally got to the bottom of it, the answer we were given is that a boat always leaves the island at 9am and from then on will leave after it has 25 passengers.

We checked in at 1:45 and were #5 and 6 on the list.  We were kind of afraid they wouldn’t get 25 people and we would be stuck on Gili Air missing our flight, but before we had time to down a beer at the bar across the path it was 2:15 and people were boarding.

Travelers Tip:  If you want to have a drink while you wait there is a bar next to the Gili Dive Shop in view of the ferry.  They have music and WIFI so it’s a great place to chill, but just make sure you keep a good eye on the dock.  The boat was departing within about 3 min of people starting to board and no announcement was given.

Once again on Lombok you are thrown to the wolves.  We were later told lombok is the worst area in Indonesia for locals taking advantage of tourists and once again it lived up to it’s reputation. 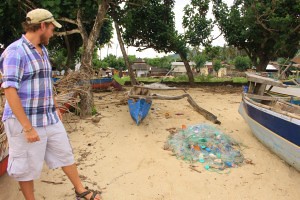 Getting off the boat we were greeted by a man offering us hotels.  We weren’t sure if we wanted to stay in Bangsal, but we did want to know the price.  Being quoted 3o dollars a night for a ho-dunk hotel with no Air-Con or hot water we decided to move on closer to the airport and that’s where we made our first mistake.

Travelers Tip:  When you get off the Ferry in Bengsal, walk past all the men soliciting you and head straight to the street.  Once there flag down your own taxi driver, preferably a blue bird taxi but if not negotiate a price (in 2014 fair price was 100,000rp) and get out of Bengsal as quickly as possible.

Despite knowing better, we fell victim to the price anchor posted in the hotel saying it was 250,000rp per person to get the the airport.  We bartered that price down to 250,000rp total, but as we found out 15min later the hotel owner kept 150,000 and only paid the taxi driver he flagged down off the street, a task we could have done ourselves, 100,000rp.

Not only did he rip off the taxi driver as we’d rather more money go to him because he was very helpful and honest, but he also lied to us.

We had been told we’d be headed to the town near the airport with his private driver in his “very nice” car where there would be many options for hotel rooms.  Not only was the driver just a random independent taxi, but there was only one hotel and that was 400,000rp a night, but luckily the driver told us about Kuta, Lombok which is where we headed.

Once in Kuta Lombok we found homestay upon homestay and were able to negotiate a nice room where we felt very safe for 100,000rp (without Air-con and hot water) a night. 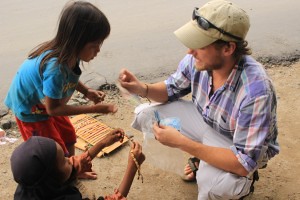 After dropping our bags we headed straight to the beach, where Tom fell victim to little girls selling bracelets.

The little 5-8 year old girls were the best saleswomen we’d met.  Within 2 mins of walking on the streets, Tom had not 1 but 2 bracelets on his body and money coming out of his wallet.

Here’s how it all went down: 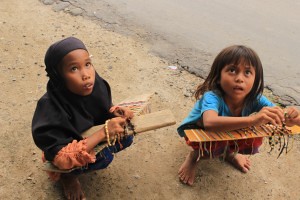 Picking out one bracelet Tom began to barter with the little girls and soon settled on a price for one.

Little Girl #2: “But Mista, that one’s not from me, be fair.” –Sad puppy eyes Tom could not resist within 2 min Tom had two bracelets. 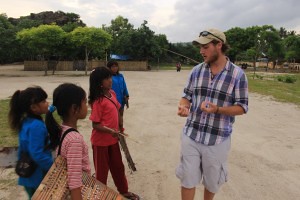 Tom:  “I already have 2 now and I have been fair I don’t need anymore!”

Little Girl #2: “But what about your girlfriend?” Pointing to me.

Tom politely declined and we continued down to the beach.

100 feet down the road we soon realized little girls selling bracelets were a dime a dozen.

In gangs of 5 these little bracelet sellers aren’t quite so cute but instead rather resemble a gang of zombies!  We felt like we were in World War Z! 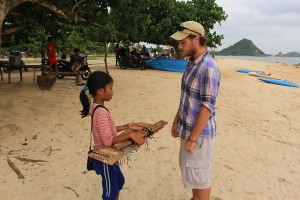 “Open your heart and open your wallet!”

We made it out alive with no more bracelets but did hear some convincing arguments, my favorite being, “Open your heart and open your wallet.”

Despite the army of little salesmen, Kuta Lombok is a cute little surfing town.  There are cute and cheap accommodations, good food, WIFI, and beautiful coastline and beaches.

It’s a pretty small town, so unless you are the laid back surfer kind I’m not sure if I would spend too many days in Kuta, Lombok; but it is an excellent place to kill a night before or after you fly out or in to avoid getting ripped off by the transportation system on Lombok.

Beautiful Beach of Kuta. Look closely on top of that rock are men having a jam session!

Back on Bali, we killed one afternoon chilling once again at Warung Coco, before hopping to Labuan Bajo. 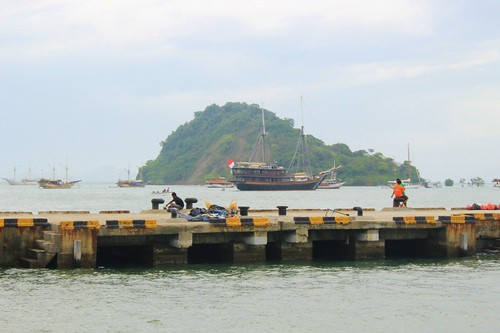 Labuan Bajo Harbor and our favorite ship in the harbor. 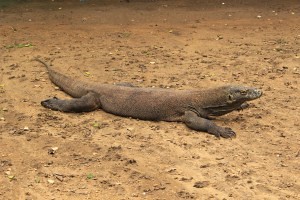 What we soon found out, was the airline we had booked with had gone bankrupt, but that was no easy task.  It was crazy hard to get a direct answer as to why no one was at the Merpati (the bankrupt company) desk.

When we finally did get to the bottom of things, I booked us on the next flight out.

A soto ayam and coffee later we were soon boarding our flight and on our way to Labuan Bajo, a port town used as a home base to head out for world class diving and snorkeling and trekking trips around Rinca and Komodo home of the Komodo Dragon!

Stepping off the plane, we quickly grabbed our bags and picked a taxi man.  Everyone was quoting us 50,000rp and we feel we got a good deal as we had buddied up with a fellow traveler and the taxi man drove all 3 of us from hotel to hotel searching for the best deal.

Most hotels are all over $30 a night, but we were finally able to find a better deal at the Hotel Gardenia for 224,000rp a night but with no air-con and no hot water.  Yes, despite the “cheaper” price we felt as if we’d been a little ripped off! 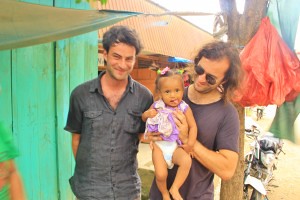 Side Note:  WE ALMOST REALLY GOT RIPPED OFF!  I have yet to experience service on our trip that I would warn people against, but Hotel Gardenia is a shady place.  We paid for our first night upon check-in and luckily did so with a fellow traveler.

As we went to check out they were going to recharge us for that first night as they told us they had no record of us paying, nor do they hand out receipts–the only hotel we’ve stayed at who doesn’t.

Knowing we’d paid at the same time as our friend we asked to see the record of his payment assuming ours would be with his.  When they couldn’t show us that either, we got a little suspicious.  We continued to argue with the man for about 15min, until a man (we’re presuming it was the owner) sitting at a table a couple feet away told the manager to let it go and just charge us for the remaining 2 nights. 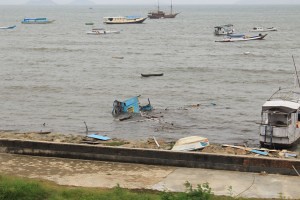 We were slightly beginning to doubt ourselves and wondered if maybe our memories weren’t serving us correctly, but later on that day in Bali we ran into a couple we had met  at Hotel Gardenia and they informed us the same thing had happened to another group as they had been checking in.

Hotel Gardenia also lied about having WIFI.  We soon found out the WIFI they offer actually belongs to the Cafe next door, which only gives up their daily changed password when you eat at their establishment.

Travelers Tip:  Make sure you get receipts for everything and if you care about WIFI ask for the password before you pay!

As  from my tangent, you can see the Hotel Gardenia obviously left a bad taste in our mouths, but the rest of Labuan Bajo wasn’t much better.

There seems to be no bartering on Labuan Bajo which is a frustrating thing if you’ve been anywhere else in Indonesia and know what the fair price should be.  While the prices aren’t crazy high–YET (this apparently is the fastest growing area in expense in Indonesia as the snorkeling is supposed to be world class and the only region home to Komodo Dragons), but having been in Indonesia for almost 2 months we also knew we were getting ripped off. 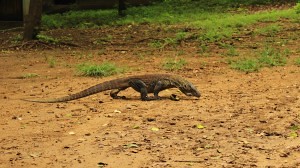 Baby Komodo Dragon on the move

High prices don’t just end at hotels, restaurants also charge a premium with the average dish being a whooping 80,000rp for dishes we knew should have only cost 15,000rp.

Getting past the high cost (which I realize is still cheap by most standards, I only wish to point out there are much nicer areas with better service and cheaper costs) the snorkeling was amazing and the komodo dragons are pretty darn cool, but rather go through the effort and cost to get to Labuan Bajo I would recommend chartering your own boat from Gili Air to snorkel around Gili Meno and go see a Komodo Dragon at the Zoo. 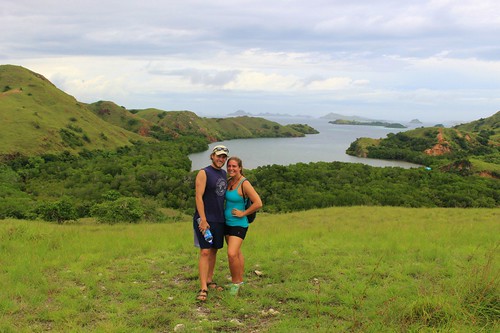 Tom and I on Rinca from the view 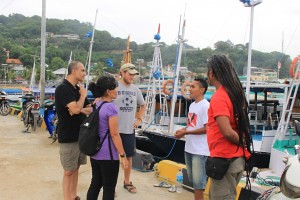 That being said, if you are like us–stubborn and sure you can find a cheap way to navigate Labuan Bajo, (we should have taken a hint from Erohisms as they are normally pretty spot on!) here are some tips:

The more people the better as the boat cost is usually a fixed price.

Logic would assume that you could negotiate a cheaper price talking with the boat captain, but the middle man has a strong market here.  Even having a native Indonesian as part of our group, we were unable to get a better deal than the local dive shops offer.

We thought long and hard about doing a multiple day trip, but once again as we were in Komodo National Park during rainy season the weather made the decision for us. 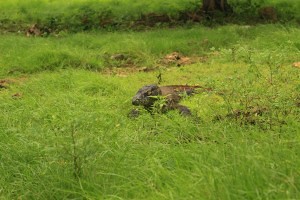 The captain was honest and admitted that even if we did the 2 day trip there was still a chance we wouldn’t make it to Komodo Island, Pink Beach, and Manta Point because if the water was too choppy it wouldn’t be safe.

What we did see was amazing–please don’t think we didn’t appreciate the beauty Labuan Bajo is the gateway to, but like I said before not sure if it was worth the cost and the hassle. 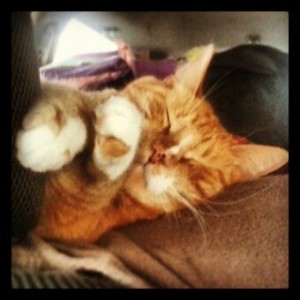 On a more personal note, I’m sad to say my little baby Colby Jack is a college drop out.  He could only handle 1 semester at  University of Michigan and will be spending his spring in Holland Michigan.