We finished off our last week in Cape Town fighting the South African flu.  Talking with our flat mate from New York who had been in Cape Town for 3 months, apparently it’s only a matter of time before you catch it.

I got hit hurt first and I would say worse, but I do have to give Tommy credit because if he felt even ½ as bad as I did he hid it well and was a trouper as it hit him during our travel day to Namibia and lingered during our time in the desert. 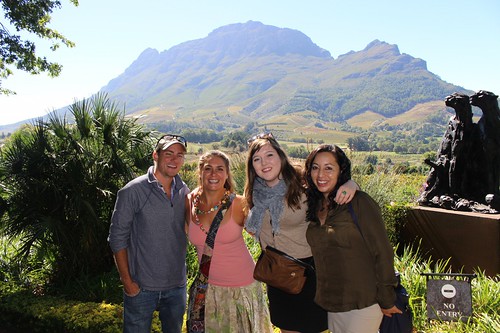 Wine tasting one last time in Stellenbosch with Maureen and Monica!

We did get one more day out and about in Cape Town with Maureen and Monica, meeting up with them for a day of wine tasting in Stellenbosch.

Not only did we wine taste, but we also tried to hit up the infamous Mzoli’s Place. 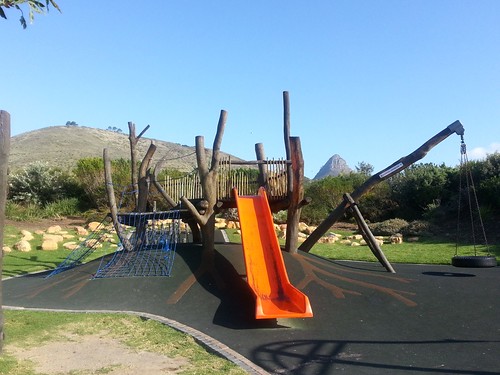 We had been told by our friend Megan that we had to hit up this “Not a butcher, not a restaurant, not a bar, but offers it all.” Establishment and upon checking it out online we were convinced that this would be an experience.

Located in the heart of the township Gugulethu we headed out there around 6:30.

Our cabby seemed wary about driving us in, but he agreed to do it.–By wary he agreed to drop us off but he refused to stick around and wait for us as he had been doing all day.

When we got there, Mzoli’s looked nothing like what the website promised.  At first we were told they were closed, but seeing signs of business the front of the house tried to get us to stay.  After 15 min or so of some confusion we were finally told the burners were off and warned we should get out of town quick…

Needless to say we were quite confused as to how this experience went south so quickly.

Luckily we received answers the next day as Monica and Maureen did a township tour of Gugulethu.

Apparently Mzoli’s is the cool place to go, but only on a Saturday or Sunday during the day only.—IE don’t try to hit this place up for dinner! 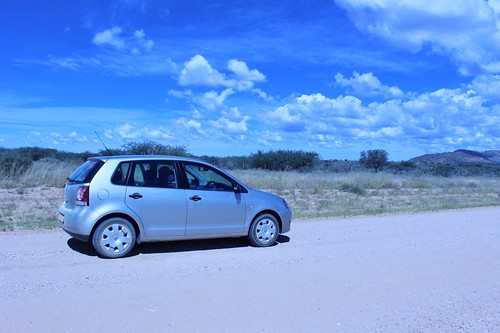 Our sweet ride for our trip through Namibia

Regardless, we have a memorable story about Mzoli’s.

We ended up having dinner at a cute Café back in Stellenbosch ending a great day with Maureen and Monica before we flew out the next day.

Our flight from Cape Town to Windhoek was probably one of the most exhausting of our travels.  The lingering South African Flu still had me weak and this was definitely the day it hit Tom.

Exhausted we reached The Cardboard Box, our hostel, around 6pm.  We set up our tent, (We had planned to camp as camping is very popular in Namibia and the much cheaper route not realizing we’d both be sick and unfortunately all the rooms were booked. ) drank a huge bottle of water, and crashed around 8pm. 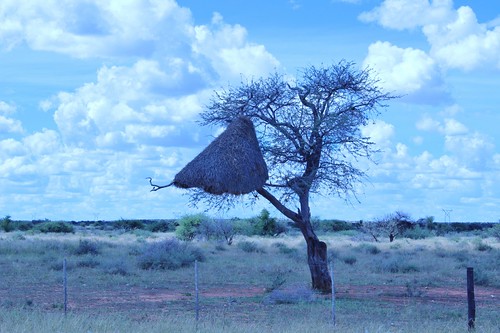 The coolest bird nests you’ve ever seen are in Namibia

I woke up the next morning feeling great, Tom not so much.

Nonetheless we had to keep moving .

We picked up our rental car headed Southwest to Sossusvlei. 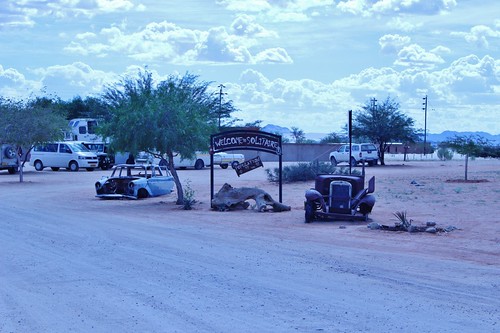 After about 100KM on the paved B1, we turned off onto the gravel roads that would take us to our final destination. 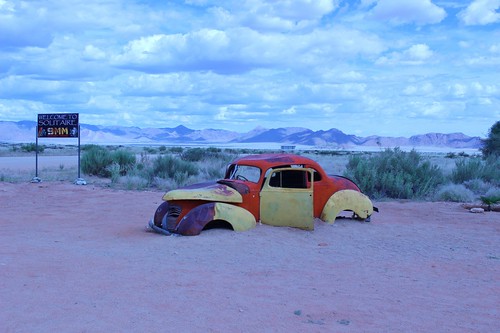 Another photo from Solitaire

5 hours later, we pulled into our campsite at Sossus Oasis which was actually pretty awesome.  The campsites are arranged in a giant circle surrounding a decent sized pool.  Each campsite comes equipped with a grill pit, bathroom, and hot water shower.

Sossus Oasis may be in the middle of nowhere, but it offers just enough.  There’s a well-stocked grocery store/gas station as well as an e-café WIFI hotspot. 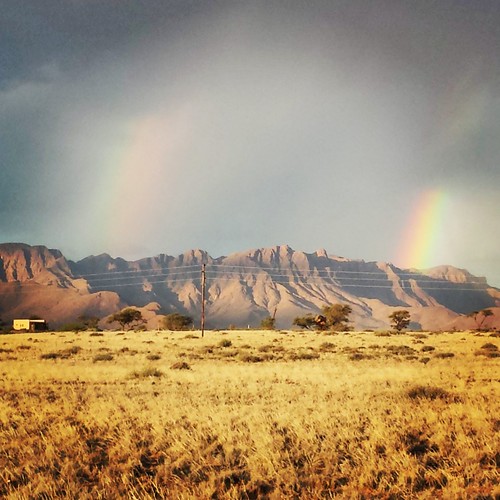 Rainbows from our campsite

We set up our tent and took a dip in the pool before Tom headed over the e-café to host a webinar to close out the launch of one of his latest programs The Flight Formula while I set up my yoga mat and had an awesome practice in the desert. 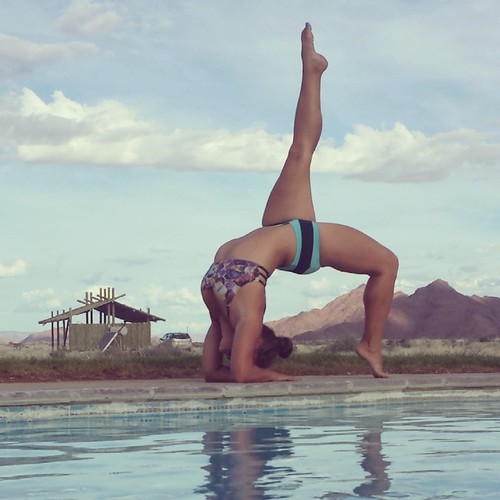 Some people swim in pools, I do yoga!…See our campsite in the background?

Buying some steaks and sausage from the gas station before it closed, I had dinner ready for Tom following his calls and we both crashed early.

Waking up before sunrise, we were in the park as it opened racing the bus of tourists to be one of the first to climb Dune 45. 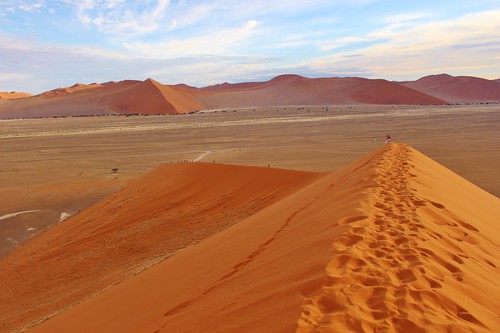 See the bus load of people we beat up the dune?

We luckily won the race heading up just as the lucky campers who paid twice as much to camp in the park came down and heading down right as the bus full of tourists got dropped off. 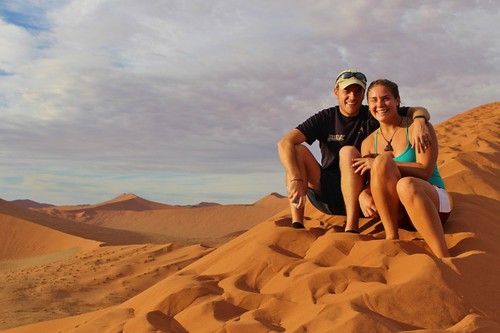 Chilling on top of Dune 45 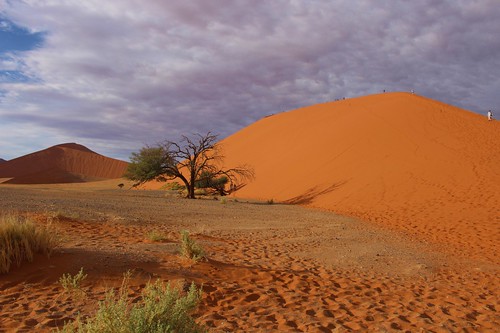 Despite missing the sunrise from the Dunes, we still had an awesome experience.  The red sand of Sossusvlei is amazing!

Heading out of the park we grabbed breakfast at the Restaurant inside the park, which turned out to be the most affordable meal we had in Namibia. 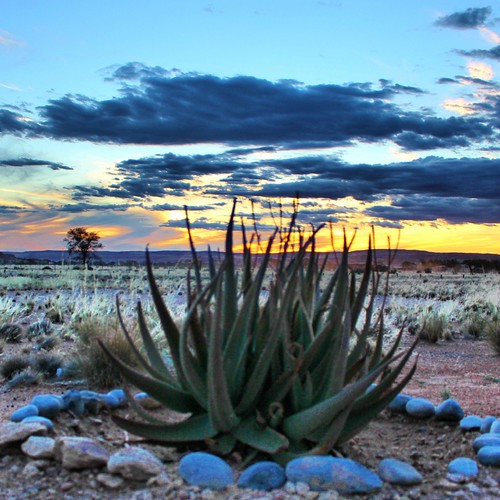 Showering and packing up we were about to head out to our next lodge when we met some fellow Americans at the gas station who invited us to a Braai with their family. 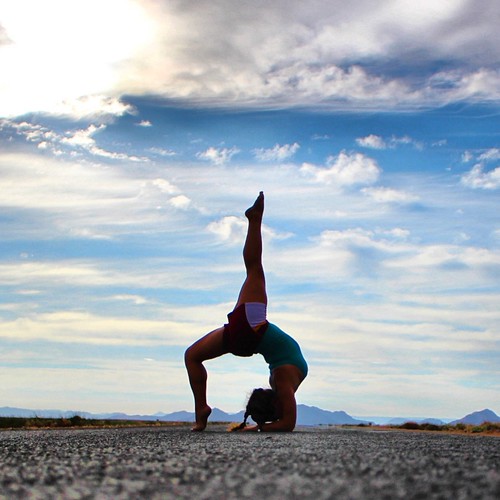 Some yoga in the Namib Desert 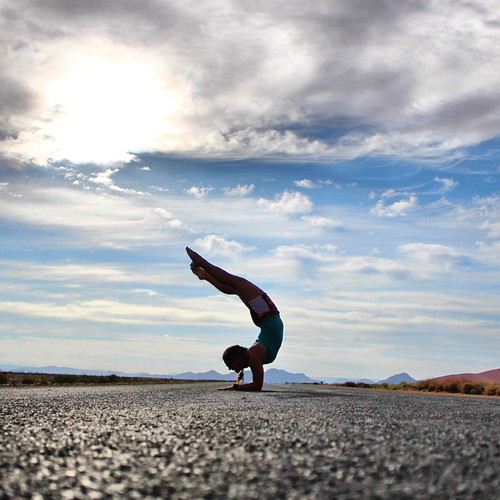 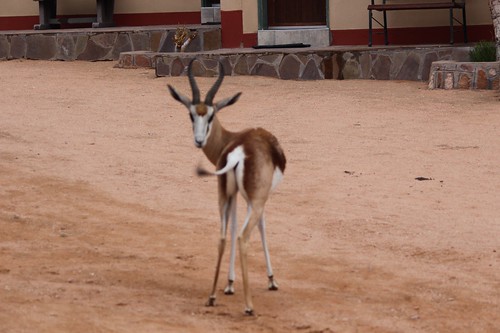 Hammerstein Lodge boasts their Cheetah Reserve, but in reality they just have a few cats locked in cages that they will show you for N100 ($10) a person. 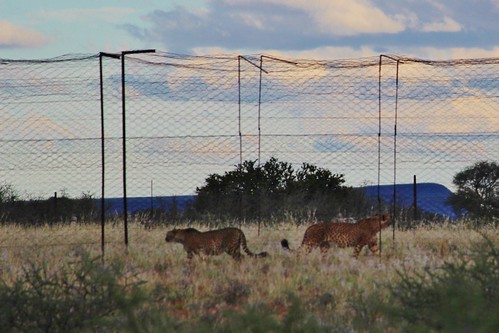 Caged Cheetahs…so instead of paying we just walked to the cages ourselves.

Nonetheless we had a blast playing cribbage at our campsite and once again got to sleep early.

Waking up again at sunrise we set out for our longest drive of the trip to Spitzkoppe. 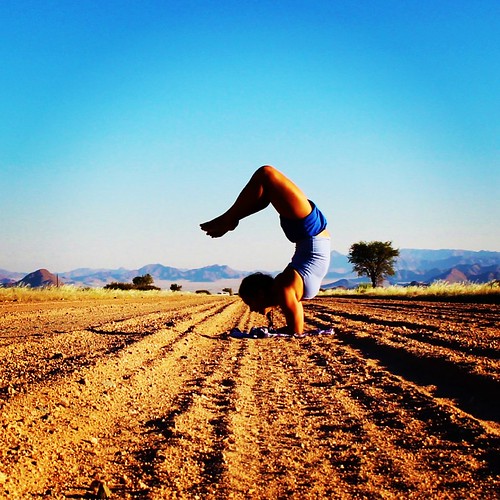 More yoga in the middle of the road…because why not?

The drive took us about 7 hours, but the scenery changes we saw were incredibly.  In a matter of 100KM we had driven from the Namib Desert Full of Mountains, to lush green mountain canyons, to flat dead desert terrain before finally hitting the coast a beautiful contrast of ocean lined with tall tan dunes.

Pulling into Spitzkoppe right as the park was closing we secured a campsite and hit up the park bar for a night cap. 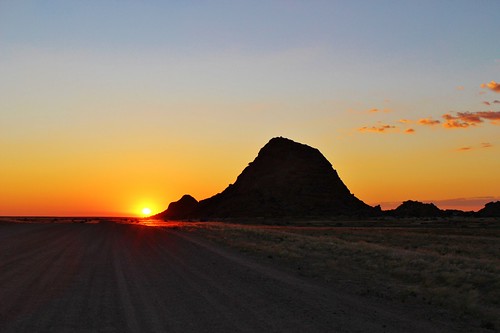 Sunset as we pulled into Spitzkoppe

We ended up meeting a nice German couple who invited us back to their campsite for a campfire, wine, biltong, and good conversation.

Waking up we had an awesome hike to Bushman’s Paradise to discover the ancient bushman paintings before heading back to Windhoek to return our car.

The people running Spitzkoppe would like you to hire a guide to help you find these ancient Bushman Paintings, but Tom and I chose to do it on our own and were happy to have a little morning adventure. 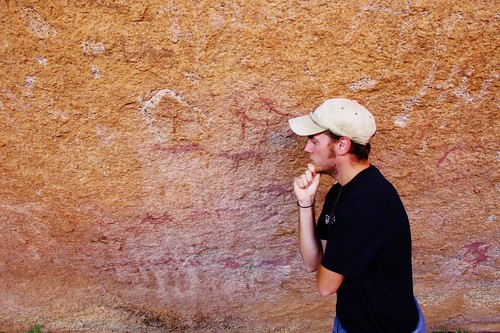 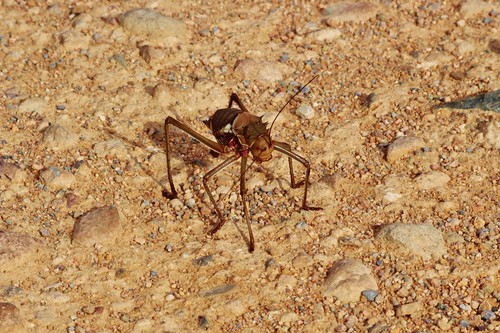 You see these guys all over in Namibia…they are the size of a fist! 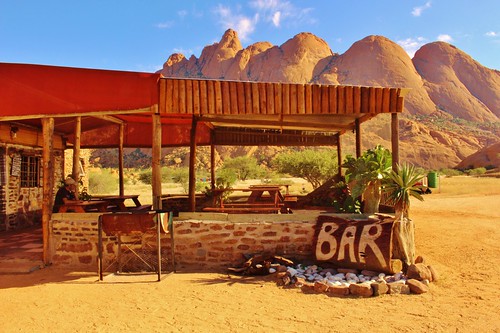 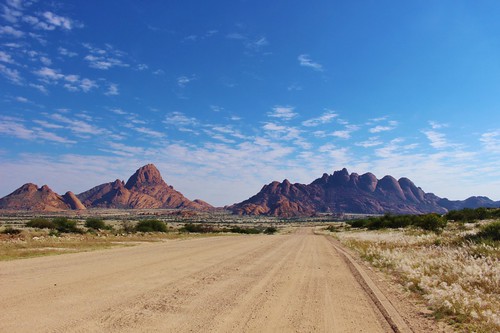 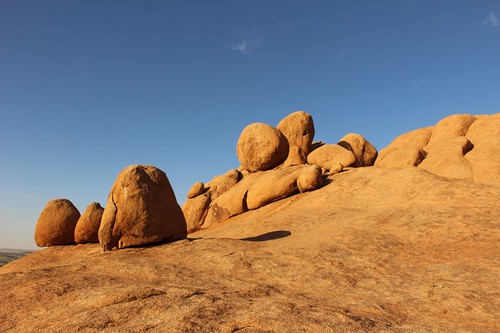 The rocks we climbed to find the Bushman’s Paradise

We decided to check out the other hostel in town, Chameleon Backpackers, and are very happy with our decision as they are closer to town and have a nicer, quieter setup.

That being said, it’s also the most expensive tent I’ve ever rented. 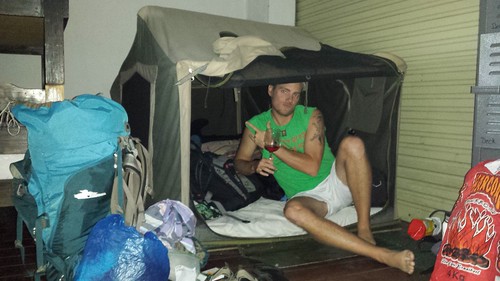 Tom chilling in our $20 tent

From here Tom and I are getting as much work done as we can before we head back to South Africa to head out on Safari in Pilansburg National Park….BTW this turned out to be about zero work as the internet in Namibia was awful.  (I wrote this post in word since I actually couldn’t connect to wordpress in Namibia but instead am posting this from Joburg)

Luckily Tom got a couple important calls in and I did some yoga by the pool each day, but otherwise our time in Windhoek was some good time spent wasted. 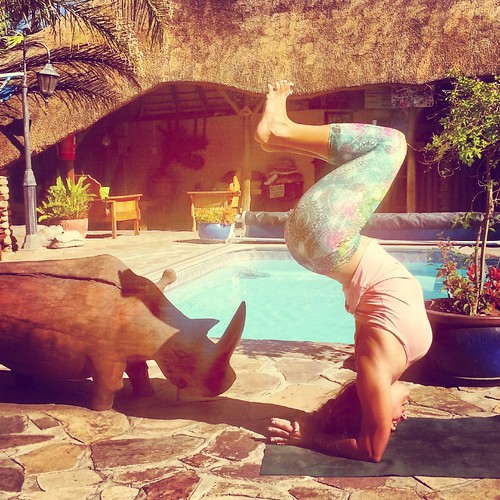 Yoga by the pool! 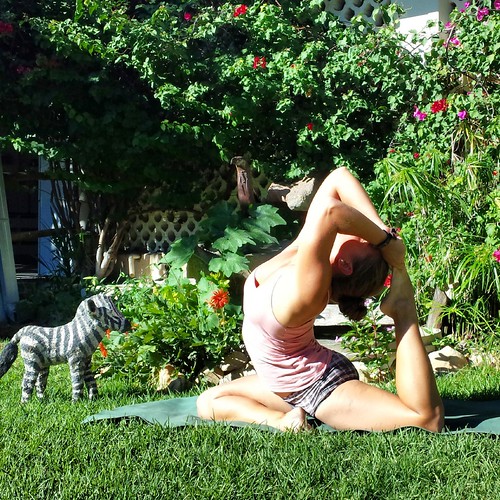 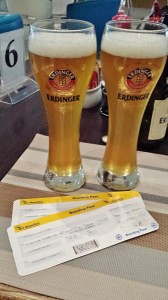 Headed back to South Africa!

While we don’t regret coming because there were some awesome sights, Courtmas was definitely ready to get back to South Africa.–Our budget prefers beds for the rates we were paying…

Hope all is well for those at home! 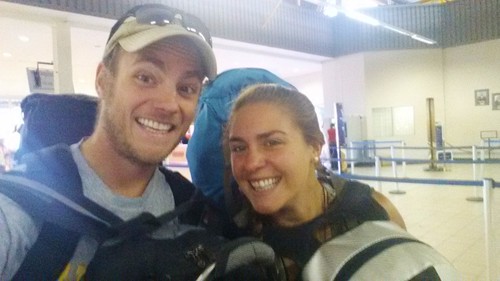