Wrapping up our Aussie Road Trip

We wrapped up our stay in Arlie Beach shortly after I posted, heading north to gain some ground before we crashed for the night at a rest stop half way to Townsville.

Our friends Danielle and James who we met our last night in New Zealand had been students in Townsville.  They warned us the town didn’t offer much, but we didn’t realize how serious they were. 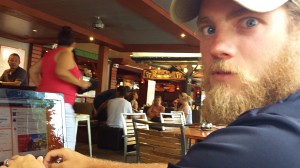 We were hoping to grab lunch somewhere with WIFI for Tom to get some work in for the day, but that proved to be fruitless.

We spent a good 30 min walking around the town building up a sweat in the 37 degree Celsius heat before finally hopping into a Burrito shop with a power outlet to grab a burrito bowl and charge Tom’s computer so he could at least write for part of the final 4 hours to Cairns.

Traveler’s Tip: Just in case you’re wondering the major towns between Townsville and Cairns; Ingham, Tully, and Innisfail (the name says it all!) offer nothing so we reached Cairns by early evening on Saturday! 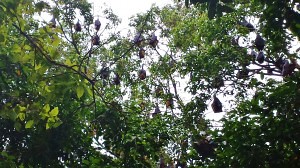 Bat hanging around above our parking spot in Cairns

Once we reached Cairns we were reminded yet again how much better it is to fly from city to city in OZ as Cairns is a pretty cool town.

Yet another Backpacker’s paradise, Cairns offers an awesome lagoon (with public showers!), free city WIFI in half the town, cheap beer deals, yummy Doner and Chicken kebobs for $9, multitudes of rainbow cockatoos, thousands if not millions of bats both day and night, day trips galore, but most importantly THE GREAT BARRIER REEF!

Cairns is also a campa van friendly town as they have no rules against parking over night and free parking during the day right at the edge of downtown.

After reaching Cairns, the first thing we did was hop in the lagoon.  It may not have been that long since we’d had a shower, but the north part of Australia is hot–LIKE REALLY HOT.  You can hardly go outside without sweating and unfortunately, while very spacious the Jucy Condo we’d been driving did not have good ventilation. 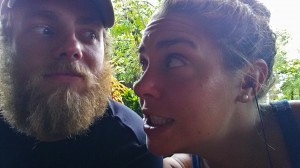 I always end up interrupting Tom at some point while he works.

Following our swim and shower we headed to a local bar to allow Tom to do some work before meeting up with  an old Westpoint boxin buddy of Tom’s, Aj.

We met AJ at Gilligan’s, a hostel which also has anightclub attached to it.  If you’re staying at Gilligan’s (which according to their ads the “hot” people do) you can get into the night club for free, but for everyone else cover is $10. 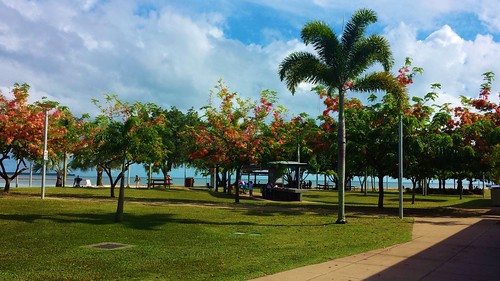 Free grills that can be found in most Aussie beach front parks. They come with free propane!

The next night when we needed a hostel, we opted for Global Backpackers.  Not only was it on the waterfront rather than 4 blocks in, but it’s prices were about half the price of Gillian’s (and since I’ve already met my hottie I don’t need free access to a nightclub!)

Travelers Tip:  Global Backpackers has 2 locations, one very close to Gillian’s and another on the waterfront.  Surprisingly the waterfront one is cheaper!  Hostels are the way to do it in Cairns and many other Aussie cities, not only are they pretty cheap (we were able to get a double room meaning no one else was in it for $45 a night) but they also offer great deals for their guests like $6.50 dinners, 10-20% off of tours, and free internet in some cases. 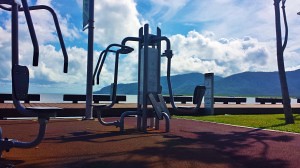 Now that’s a workout with a view!

Look at all those tours. The same can be found in any Aussie city (which is why it’s so easy to spend money here!)

Cairns like most Aussie cities is a very fitness friendly town.  Along the Cairns esplanade you can find various outdoors exercise equipment from cardio machines to leg presses!  We took full advantage on Sunday morning going for a run with a view and pausing along the way to add a little muscle tone at the waterfront workout stations.

If we hadn’t already blown our budget we would have gladly taken the Cairns Rainforest tour, but alas we dried up our Aussie budget so we decided to chill in town and that wasn’t a disappointing decision.

We also had to drop off our Jucy Condo.

Before doing so we took one last SHORT trip to palm cove.

Palm Cove is a quiet little town just 30 min north of Cairns.  We had been told they have bouncing pebbles there, but were disapointed to find out those were actually another hour north. 🙁

We did enjoy a nice lunch overlooking the cove before heading back to Cairns to return our campa.

Hanging in the Lagoon…the free option in Cairns–not too shabby!

Our last day in Oz (part 1) was our snorkel day. 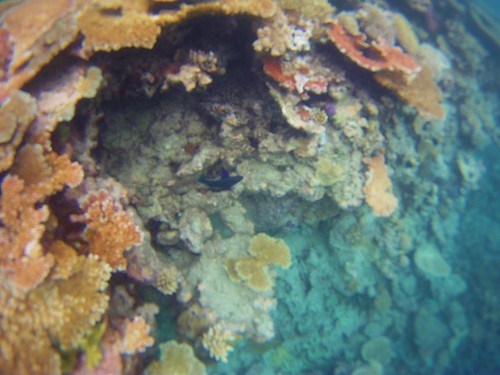 We woke up bright and early and headed down to the marina to check in. 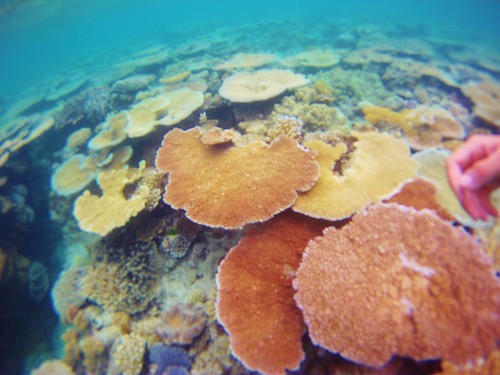 Like Milford Sound there are many companies that will take you out to the Great Reef but unlike Milford, all tours aren’t created equally.  You can get a tour from anywhere from $99 (discounted even more if you book through a hostel you’re staying at) to $150. 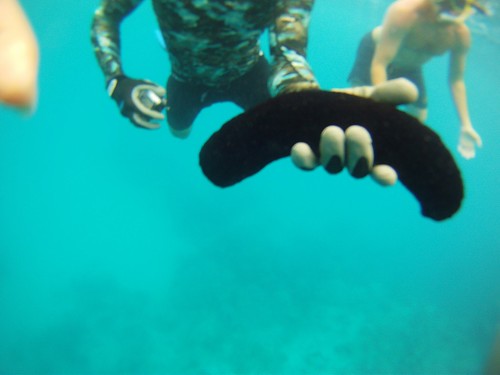 Travelers Tip:  Don’t be cheap when booking your tour.  Much of the Great Barrier Reef is dying.  The more expensive tours will take you further out where you can get the real experience. 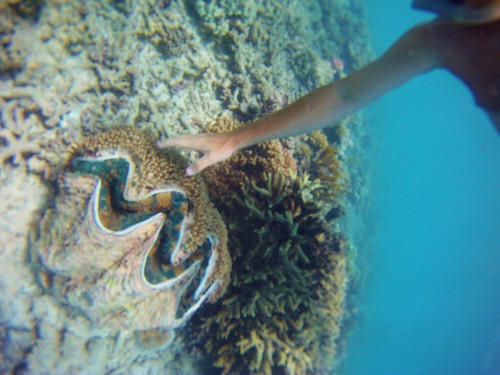 Tom swimming down to check out the Giant Clam

We opted for the $125 (discounted because I booked early online) tour from Down Under. 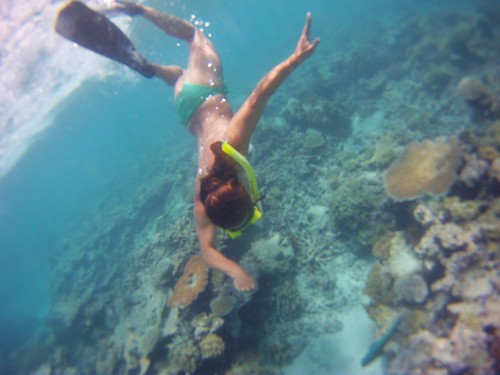 Me swimming down to check out a fish

It was a pretty cool experience.  We got a free lunch, plenty of snorkel time at 2 locations, comedy and live music from Elvis (a crew member onboard, the real Elvis is dead), and free wine and cheese on the way home, but at the end of the day we may have been more impressed by the snorkeling in Maui. 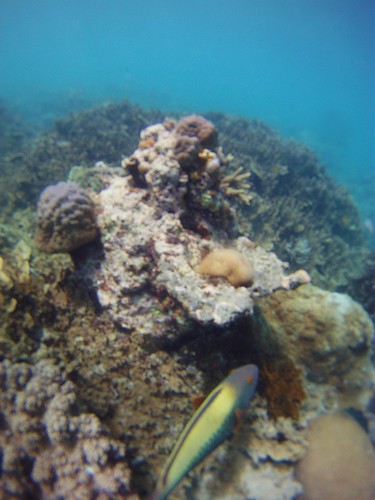 We saw more wildlife (Colorful fish, a giant clam, a sea slug, a white tipped shark, and many people saw turtles) at the Great Reef than we did off of Lanai, but you can definitely tell the Reef is dying. 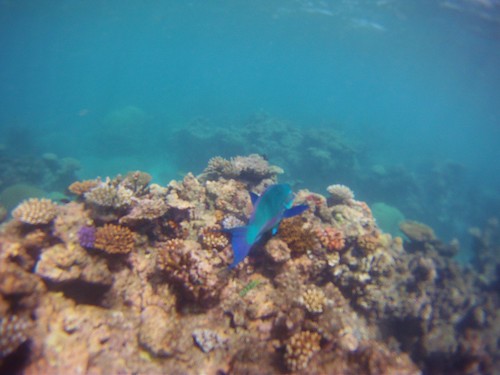 Who knows, maybe we didn’t pay enough to see the real deal.  We made friends at our hostel that evening who paid $180 to dive the reef (the equivalent of what we paid to snorkel since dive is more expensive) and they were blown away by the reef, but they also had never snorkeled or dived before. 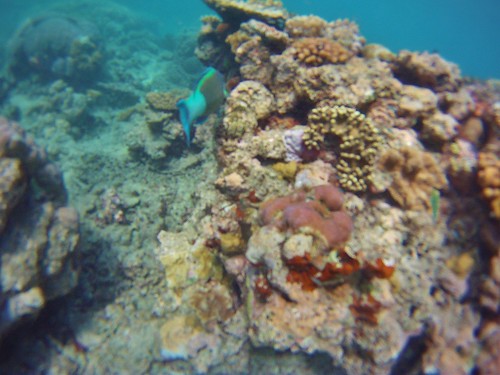 Trust me we’re not trying to be Debbie Downers, the Reef was amazing–we’re just glad we experienced it now because it might not be there forever! 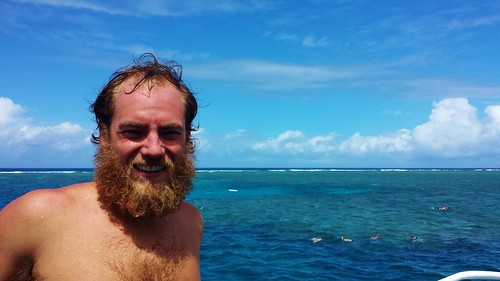 Above water at the Great Reef was pretty spectacular as well! 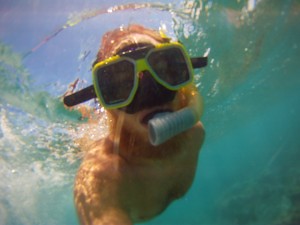 Exhausted we made it back to our hostel to start packing up to head to Bali.

When we were all packed and ready to head out, we went downstairs to book our airport shuttle (for 3:30am the next morning) and pick up our 1/2 priced meal vouchers for the evening which is where we met our new Swiss friends Eleonore and Hugo. 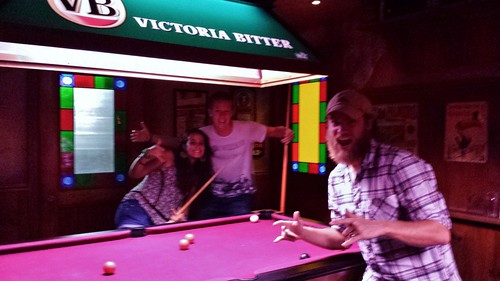 Playing pool with our new friends.

We spent the rest of the evening at P.J. O’Brian’s with Eleonore and Hugo teaching them to play pool.

As Eleonore put it, it was a “US vs. Switzerland battle” and I can happily report the US came out on top.  Sorry Eleonore and Hugo you did put up a great battle at the end! 🙂  Maybe one day we can have rematch. 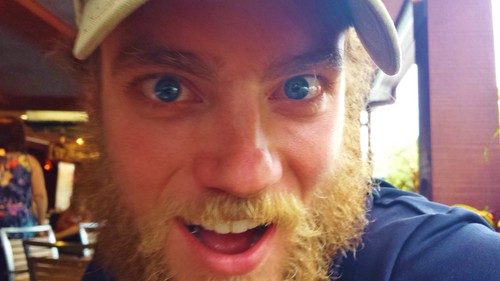 See you next time!  FROM BALI!!