So you can imagine my disappointment when I started reading up on these activities and learned there is so much controversy surrounding the treatment of the animals to make them available for tourists.

Deciding that we needed to make the decision for ourselves, we crossed Elephants off our list in Laos.

Our experience in Laos left us not quite with regret, as the elephants we rode were supposedly rescued.  The elephants we saw, however, just seemed so sad when they were chained up between rides so we did leave the experience with mixed feelings.  I’m glad we saw it for ourselves as I would have always been curious, but it isn’t something I’d do again.

I had some doubts about heading to the Tiger Kingdom after our experience in Laos with Elephants, but my love for cats and my desire to see their majestic cousins outweighed the few mild warnings I’d heard.

I say mild warnings because whereas there is a lot of documentation on  how the elephants are mistreated and I’ve read many awful accounts of the elephant circuses where they are beaten if they don’t do tricks (we didn’t attend one of these!), the only rumors of tiger abuse is some animal loving tourists claim the tigers must be drugged and sedated to make them timid enough to be around tourists. 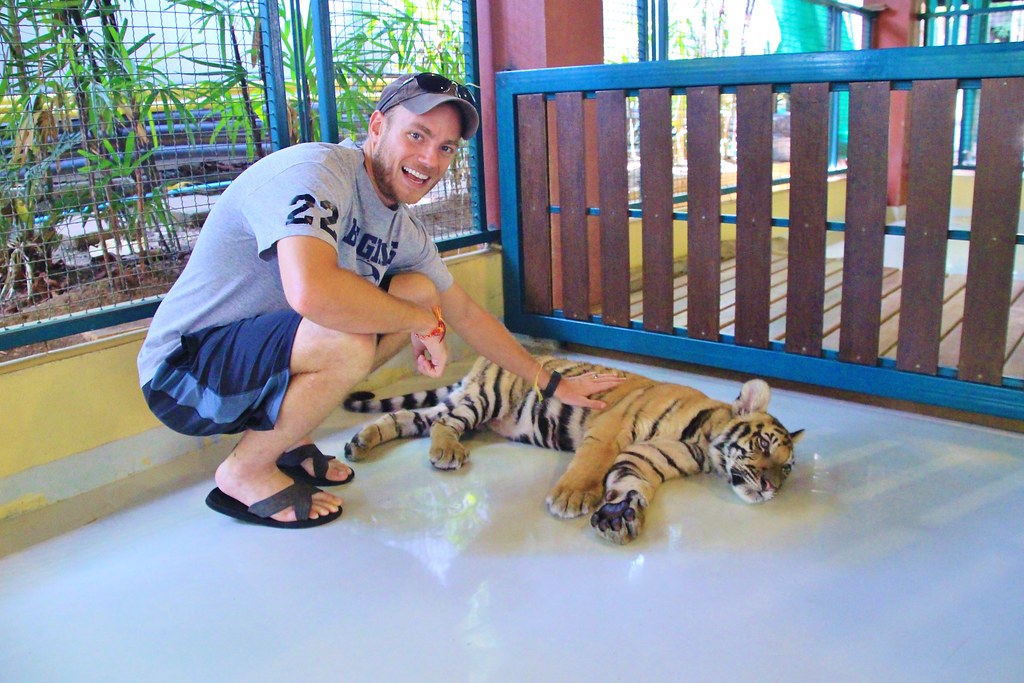 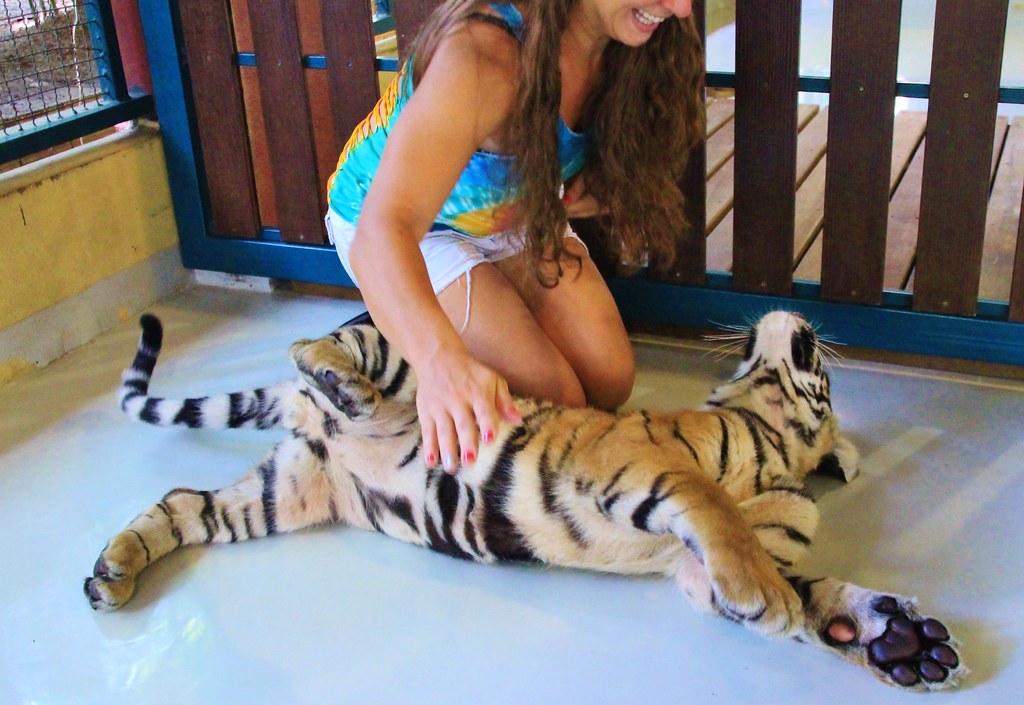 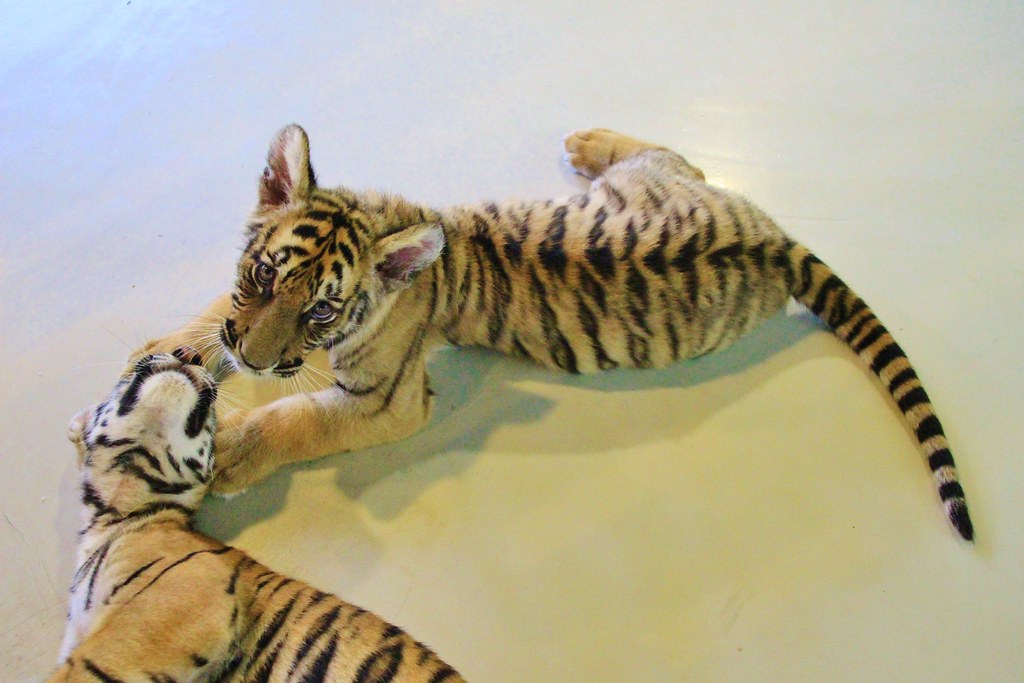 Tiger Kingdom claims on all their brochures and website that this isn’t the case and after seeing them for ourselves I would believe it.

Tom and I loved our experience at the Tiger Kingdom.  We thought the baby tigers were adorable and the grown tigers were simple majestic.  It was amazing  experience being so up close and personal with them.

The baby tigers we saw were most definitely not drugged as we watched two brothers wrestle and play the entire time we were in their pen.  One baby took a liking to me and while I wish I could have wrestled with it like it was doing with his brother, I will say the 1:1 ratio of workers to tigers made me feel completely safe during my visit.  Every time the tiger started to get feisty, the worker would step in and pull him back calming him down. 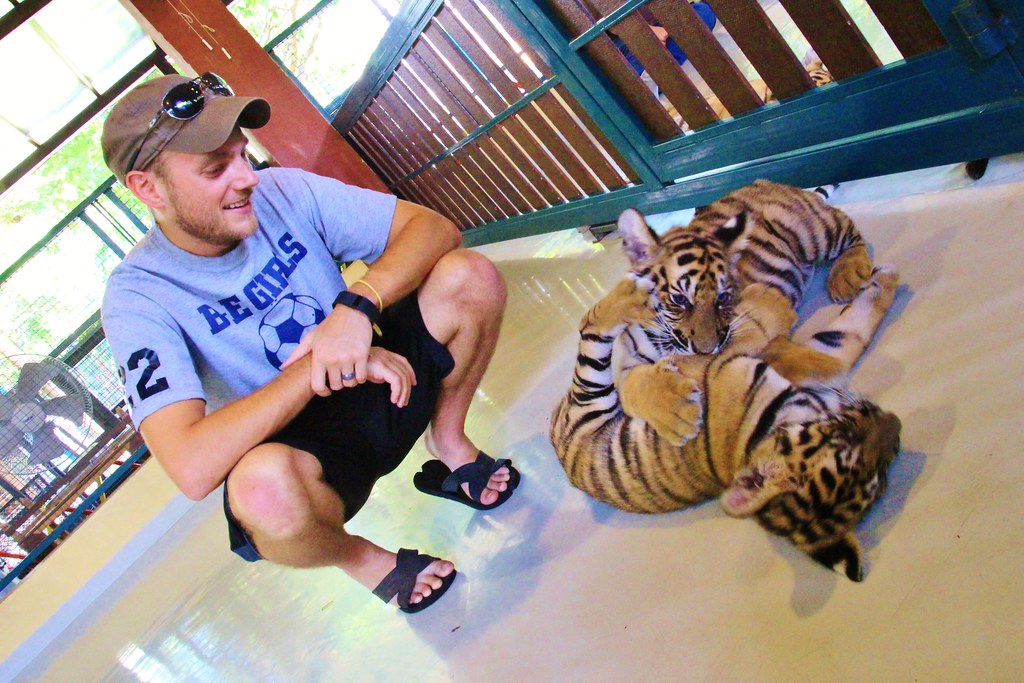 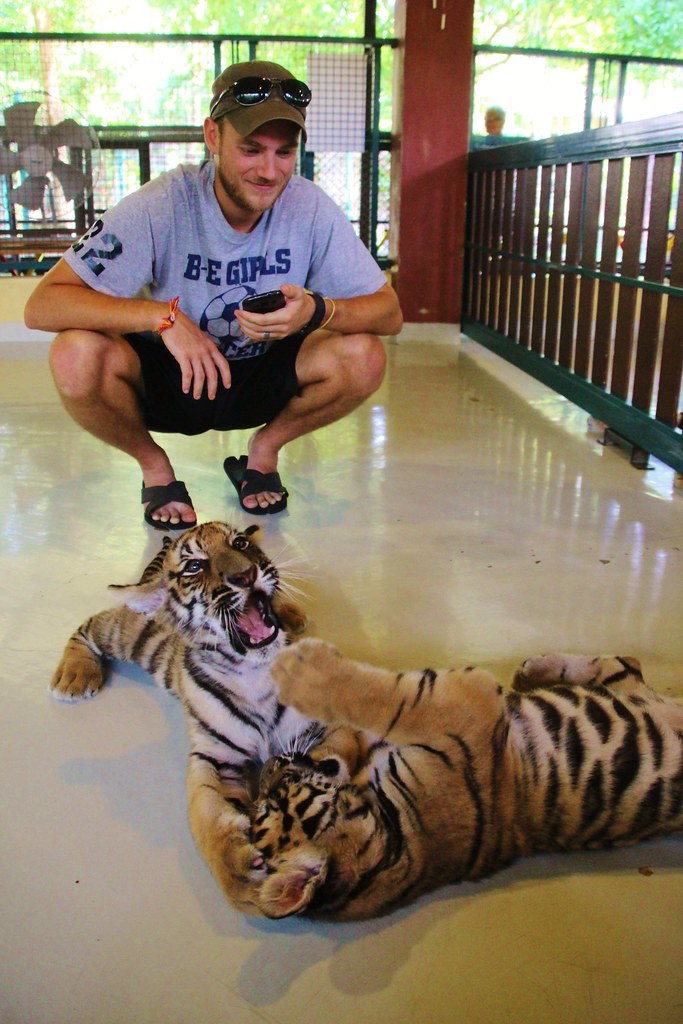 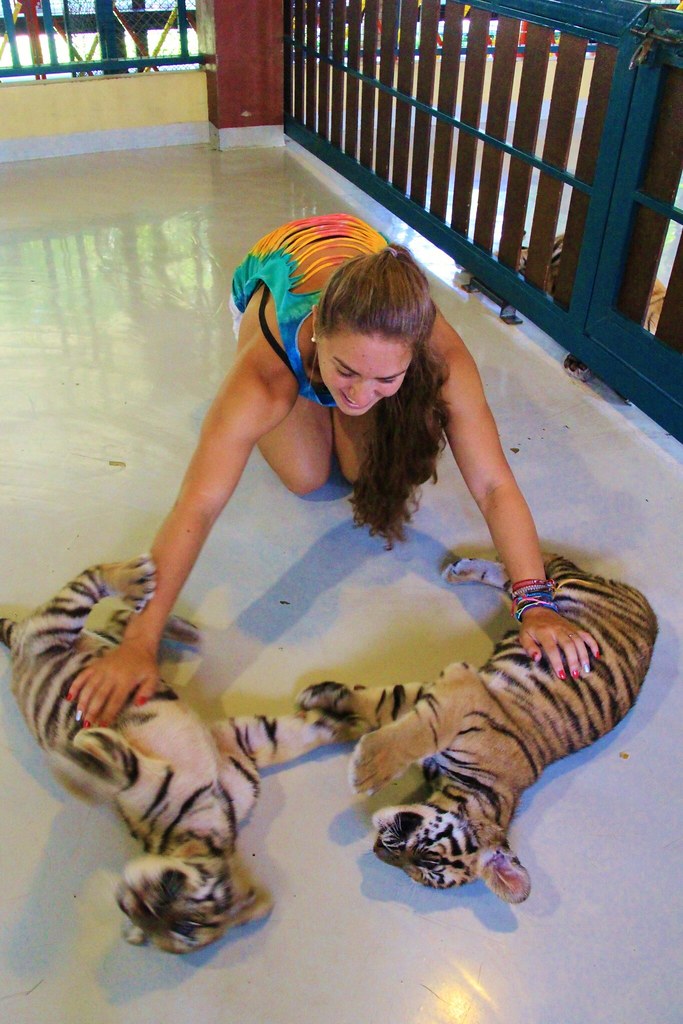 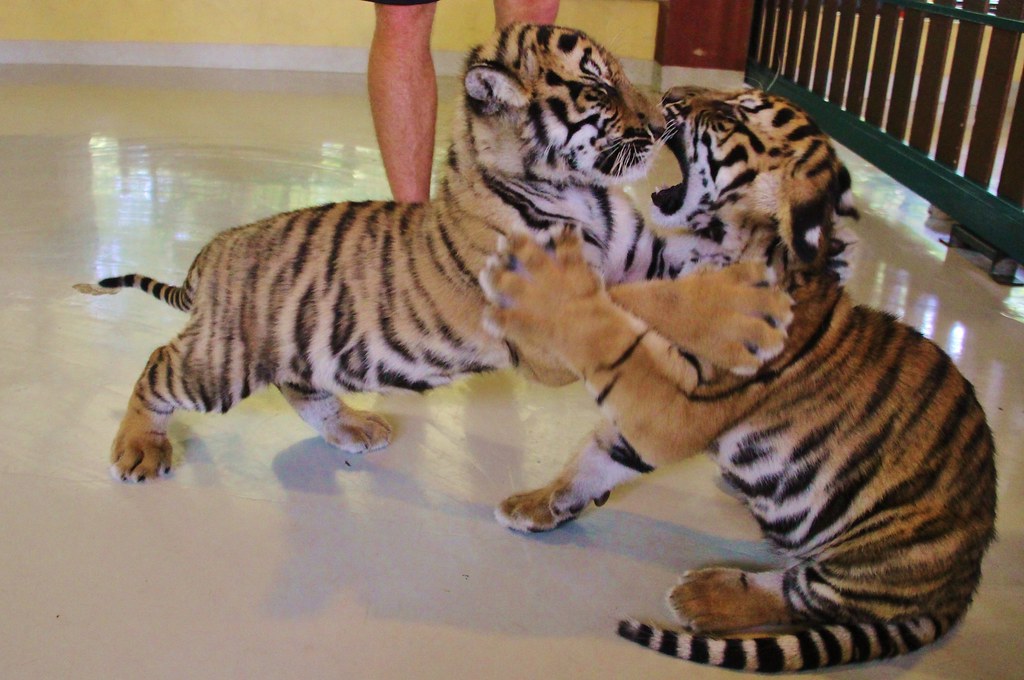 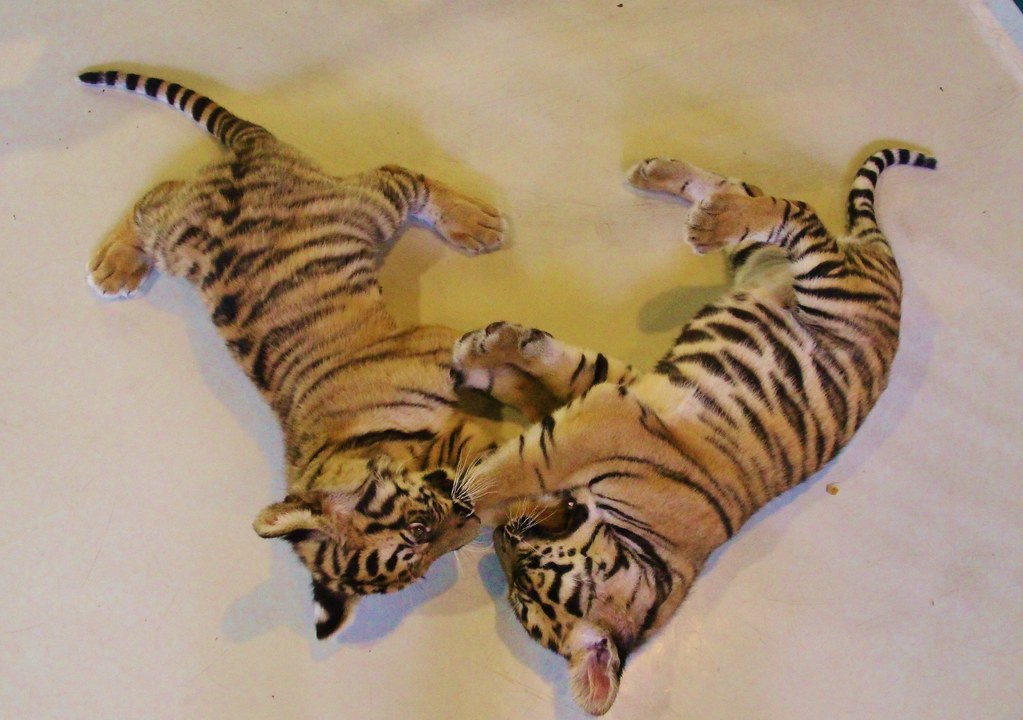 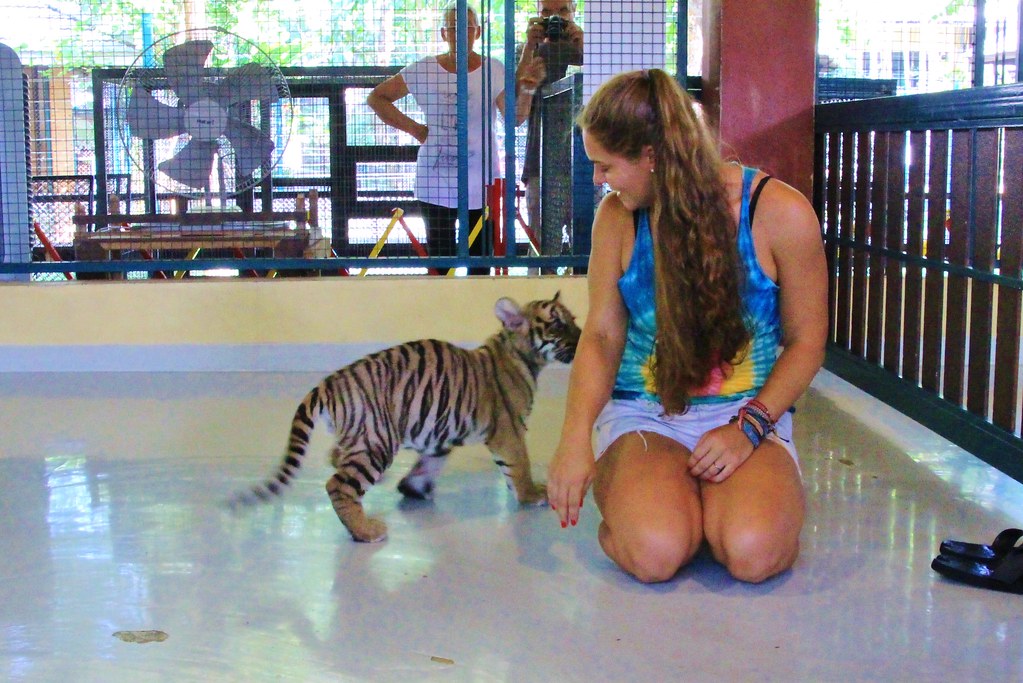 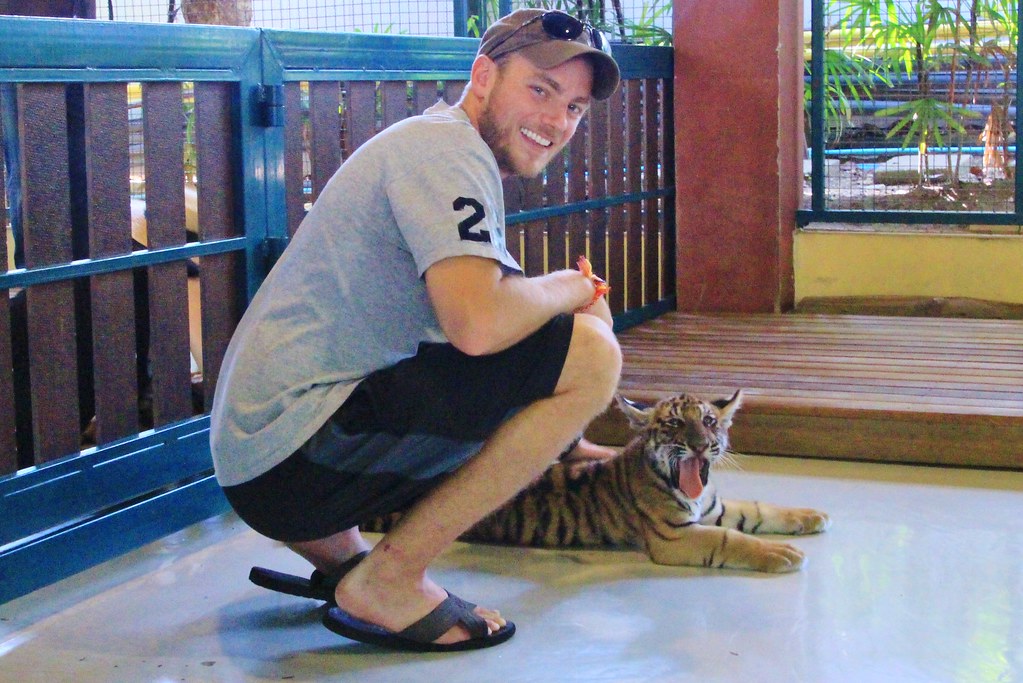 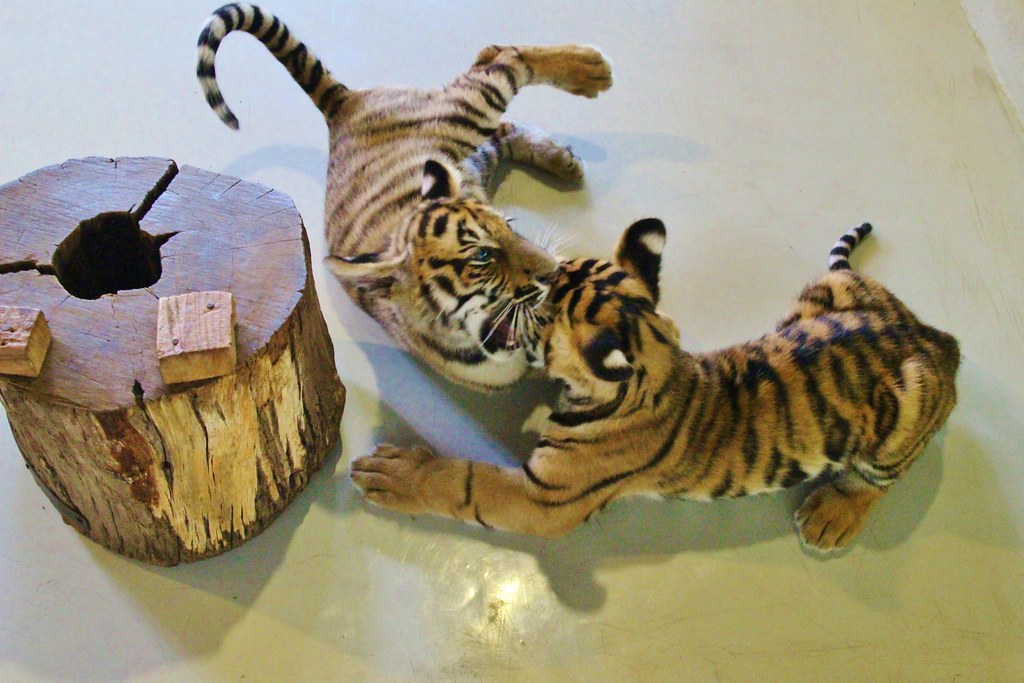 The larger tigers were fairly boring, most just laid around and/or were napping but they seemed no different than any tiger I’ve ever seen in a zoo.–The only difference was I was allowed to lay with them.

While slightly lazy, I don’t believe they were drugged as they did make good eye contact and seemed alert when they did get up and move around. 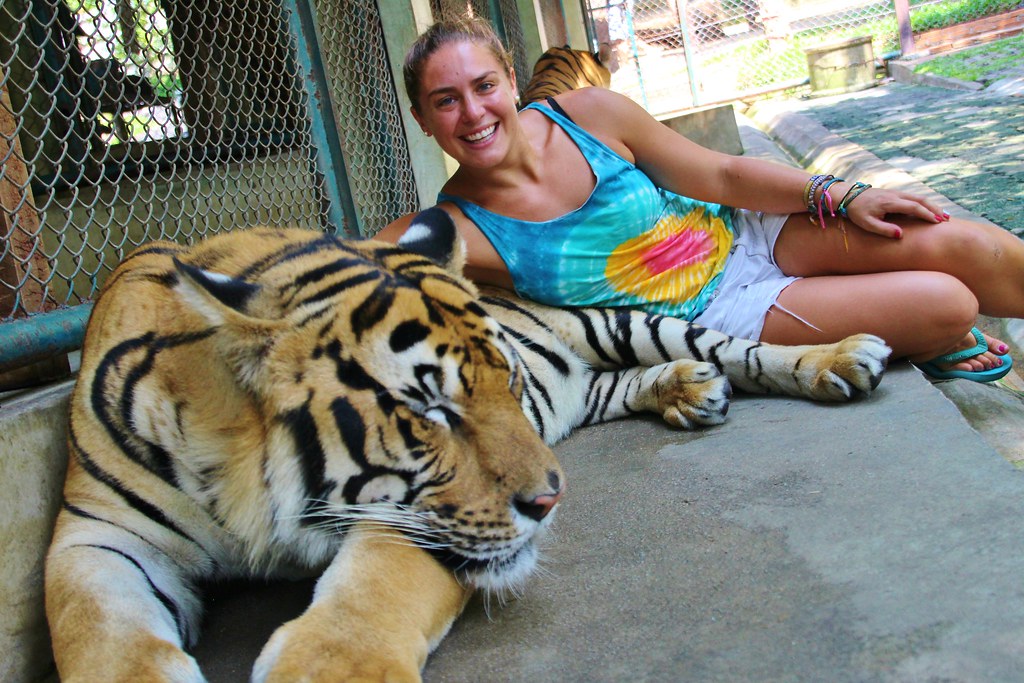 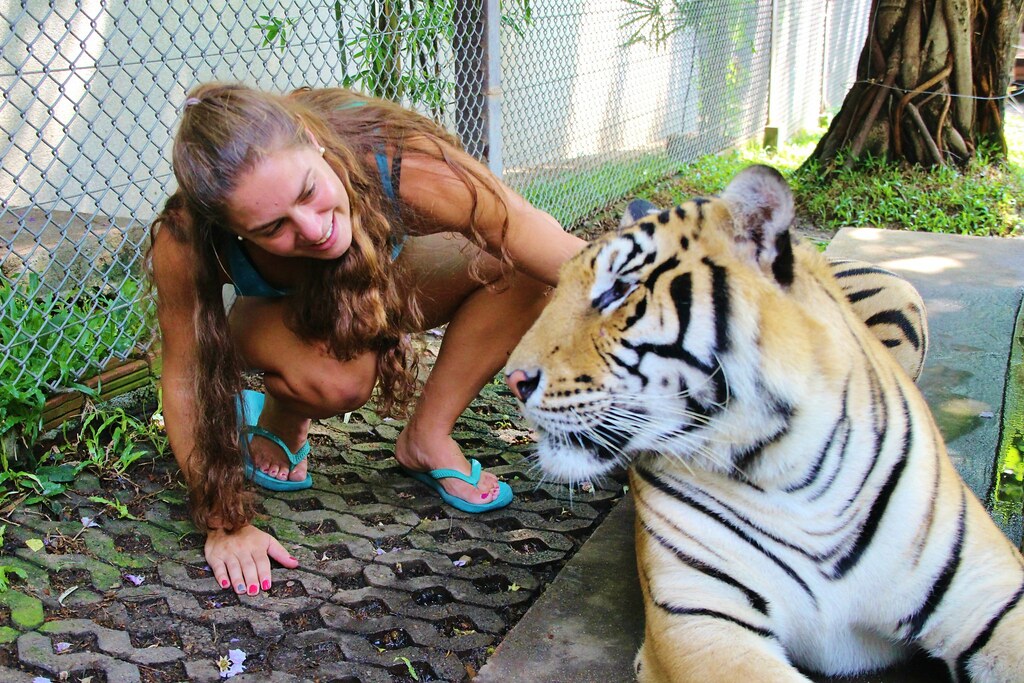 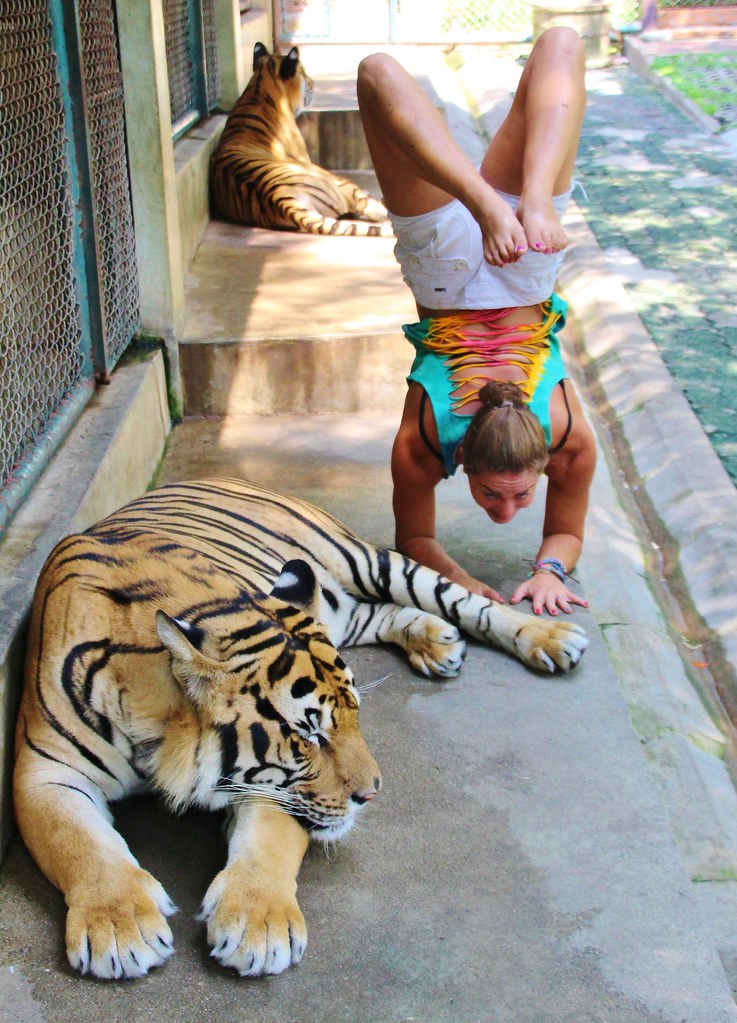 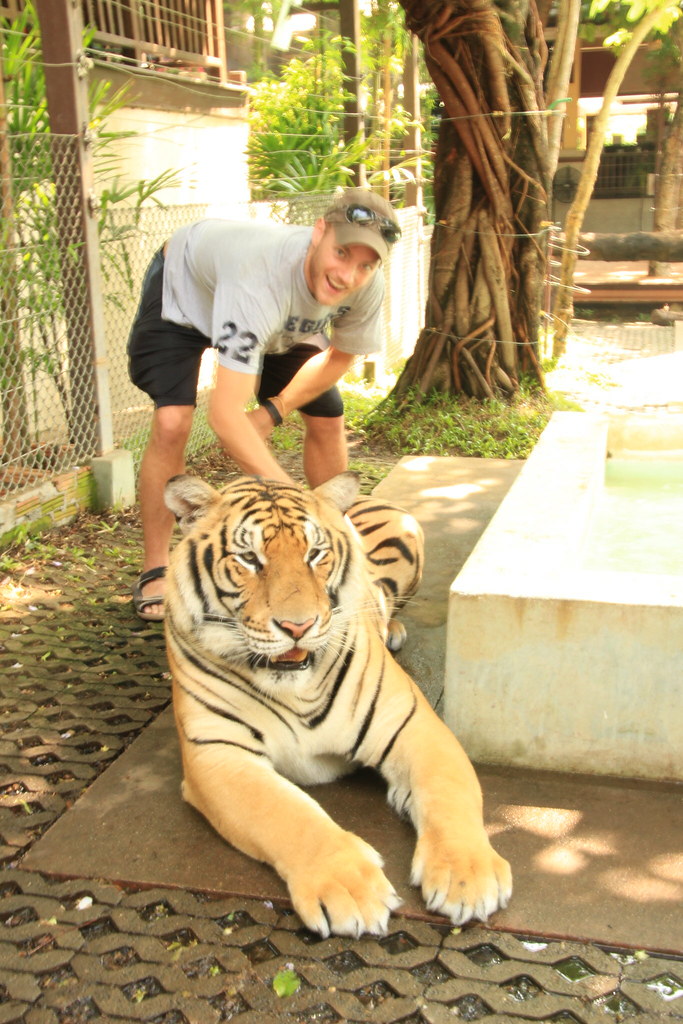 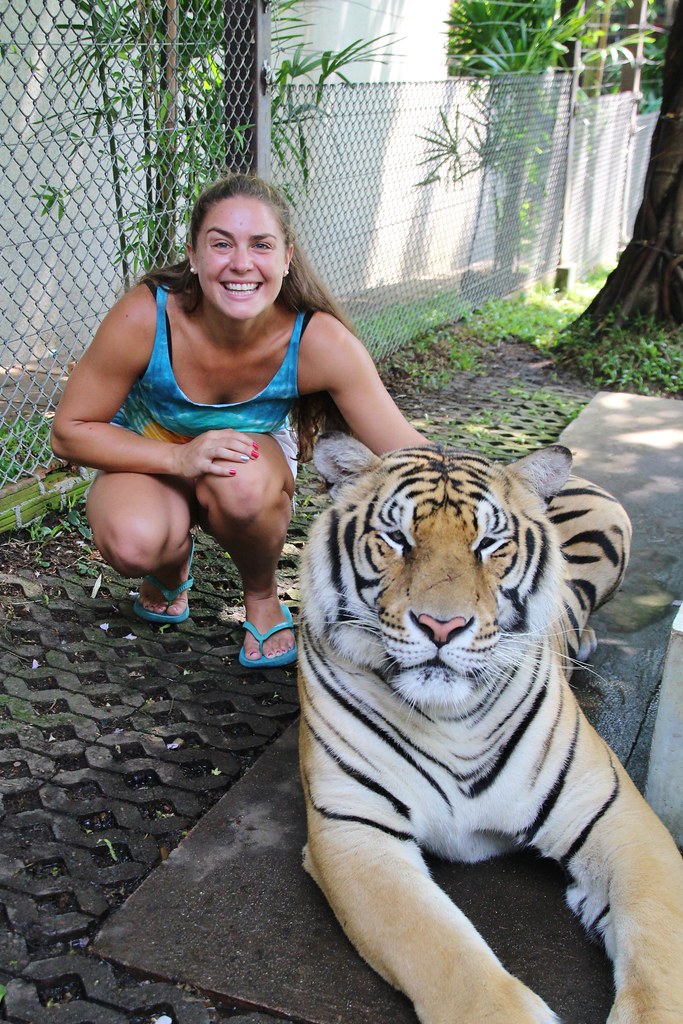 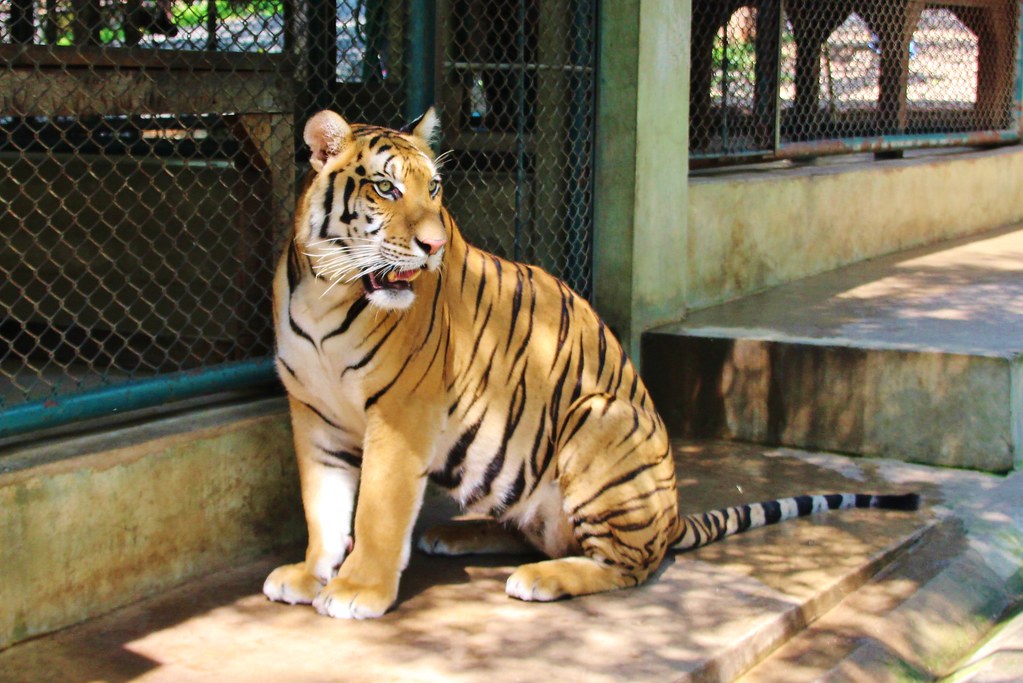 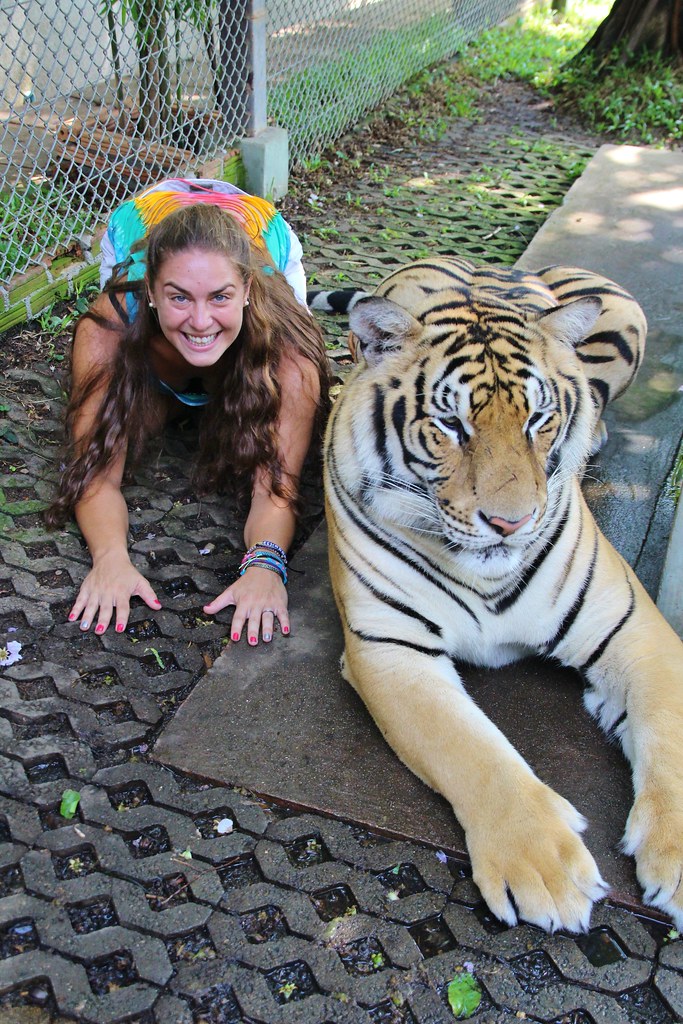 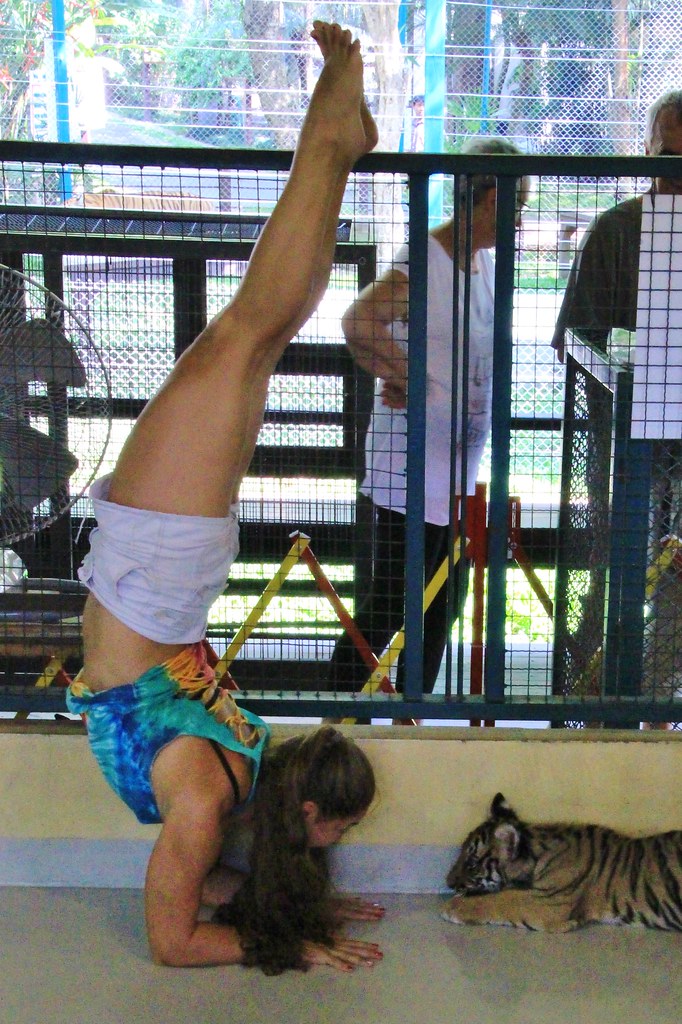 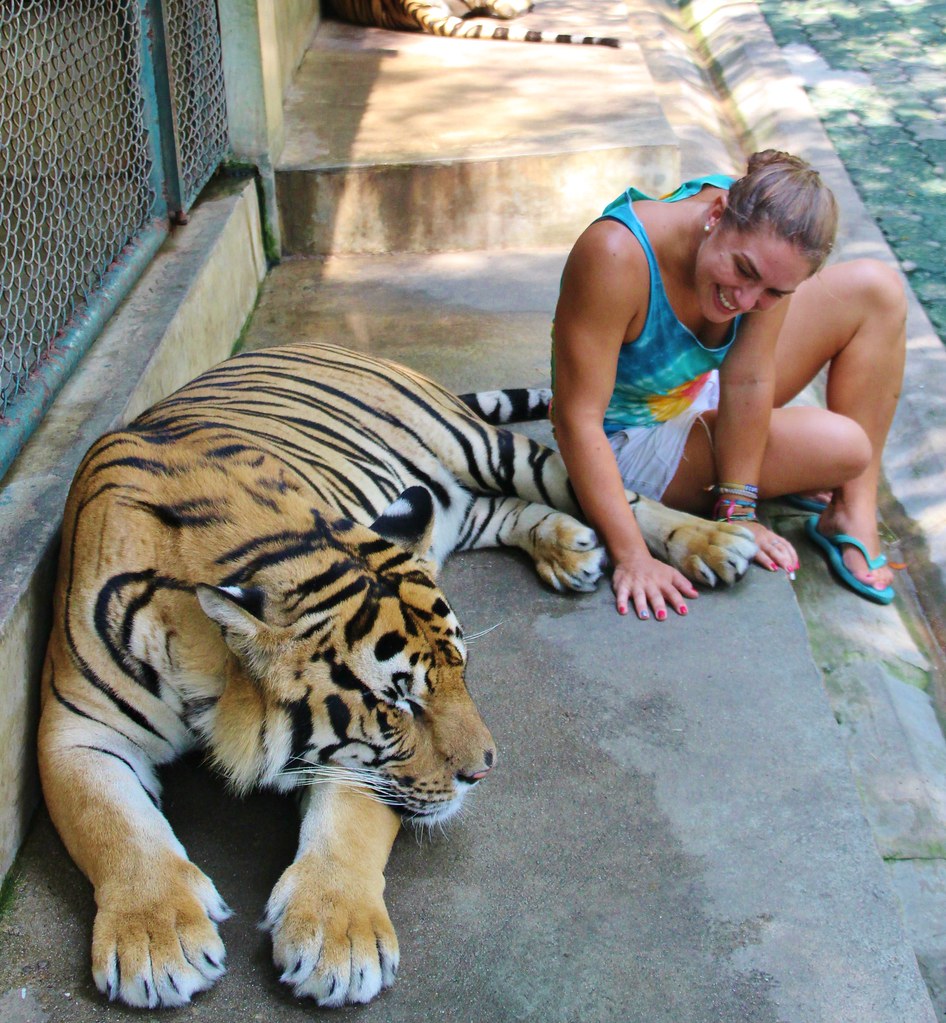 It makes sense that the tigers would be fairly domesticated given that they have been around tourists their entire lives.  Just as this wild African Lion was kind and gentle when reunited with the people who raised it, I imagine these tigers grow up interacting with humans and therefore are very accustomed to being around people. 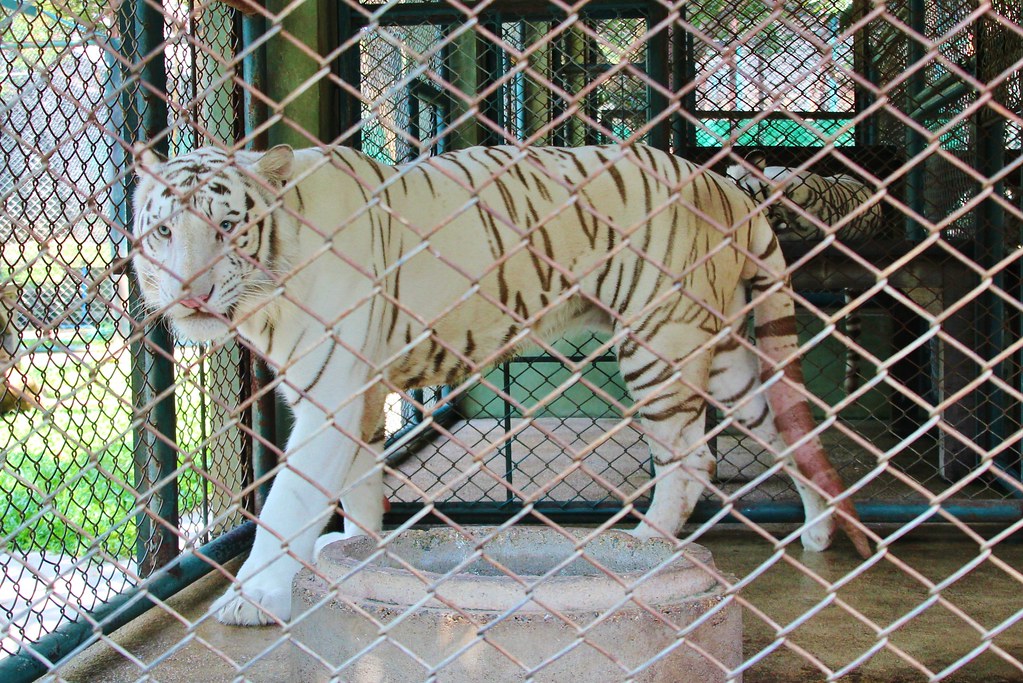 The Tiger Kingdom also has White Tigers, Siberian Tigers, and an African Lion.

We’ve been loving Chiang Mai.  The markets, food, and massages have been great (more on those later) but the Tiger Kingdom was definitely one of our favorite things here!

Would to visit the Tiger Kingdom?

Why or why not?  Leave us a comment below and let us know your thoughts!