We wrapped up our stay in Napa last Friday.

Denise has Fridays off so we got to play with her one last time, wine tasting at Jessup Cellars and Luna. 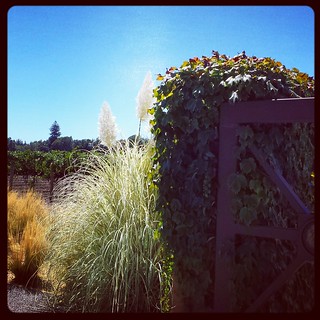 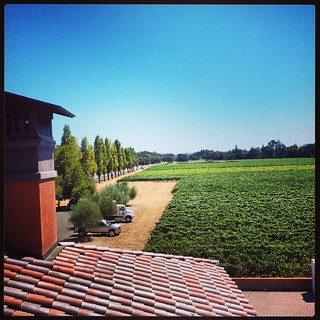 Jessup Cellars in Yountville is one of my favorite wineries to taste at.  It is  best to make an appointment, but when you do, you get an great experience.  They not only give you a great sampling of their wine, but also a sampling tray of cheese, nuts, and chocolates along with a personal sommelier to educate you on their wine as well as help you pair the wine with the best pairings to bring out the flavors the wine has to offer. 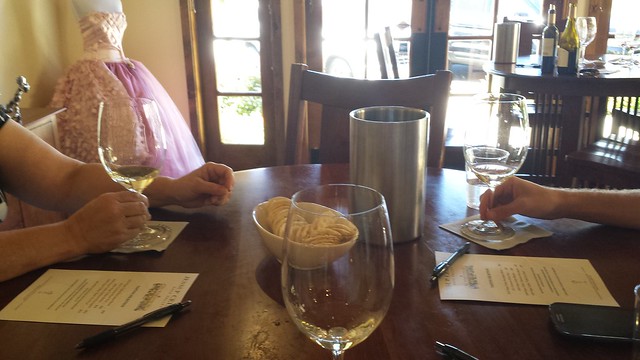 Friday afternoon after tasting, we caught the Napa vine down to El Cerrito Del Norte to catch BART down to San Leandro where we stayed with our friends Laura and Josh for a couple nights. 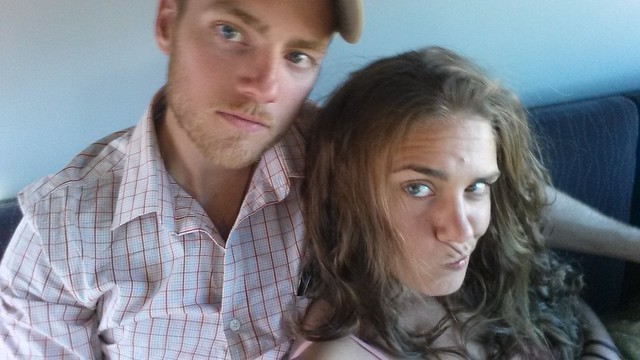 Goofing off on the Vine on the way to San Leandro

We had a blast in San Leandro.  Reaping the benefits of Josh and Laura’s many hobbies!

Tom got a good chunk of time to work on one of his latest projects while I hit the track with Laura and Josh and was able to throw Javelin with them for a couple hours.  (Hobby #1 Josh and Laura currently train and compete as Decathletes and Heptathletes.)

Later that evening we had an awesome BBQ with Abalone, (Hobby #2 Josh dives for Abalone) homegrown tomatoes, (hobby #3 Josh and Laura have a garden), and homemade wine and beer.  (Hobby #4 Josh brews and bottles his own beer and wine.)

Waiting for BART in San Leandro

Sunday morning as Josh and Laura were prepping for a day of brewing, we packed our bags and headed back to BART to head to SFO airport. 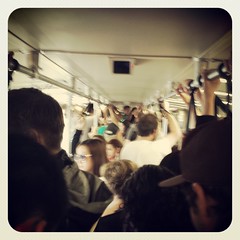 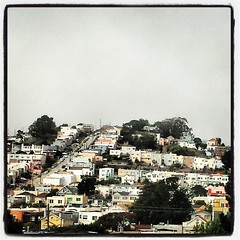 The BART ride through the city was super cramped because the Bay Bridge was closed over labor weekend. 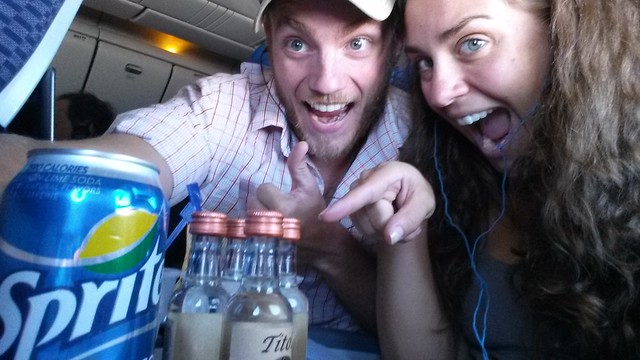 The flight over to Hawaii was one of the best either one of us had ever been on.  Each seat had it’s own TV stocked with newly released movies and songs.   The flight attendant also hooked us up with free vodka after seeing Tom’s Military ID! 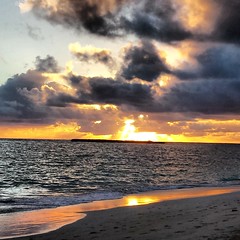 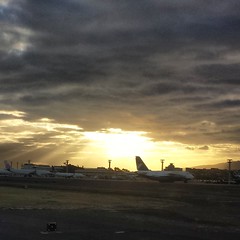 We touched down in Honolulu, Hawaii just in time to catch our first sunset.

The first view turned out to be only a small teaser to the amazing views we’ve been catching! 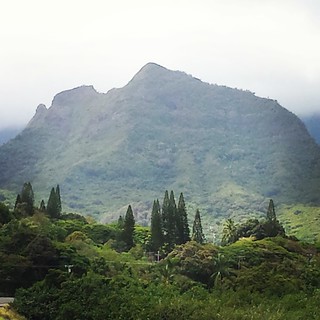 The view from Bikram Yoga Kailua

We spent our first couple days in Hawaii over in Kailua on the East coast of the the island.  We crashed with Tom’s friend Tim who happens to live 3 blocks away from a Bikram studio!  I enjoyed practicing at the small studio with windows over looking the lush Hawaiian Mountains and am pleased to report I was also able to pick up 4 classes next week! 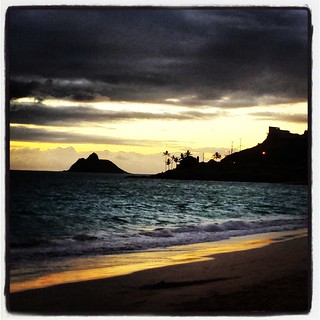 We have been taking advantage of our jet lag and waking up early around 5:30.   A typically day for us involves an early morning  run or walk to catch the sunrise.  Bikram yoga for me at 9 while Tom works.  Spending the afternoon lounging and reading on the beach. 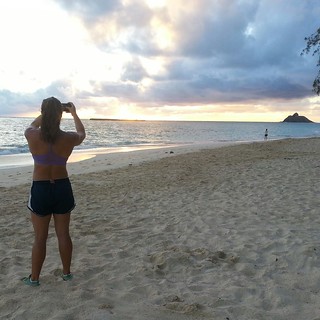 Tuesday we left Kailua and headed  over to Honolulu on the west side of the island to have a couple nights of a real Honeymoon at The Hale Koa Hotel.  We were very pleased when we check in and saw that we got an awesome ocean front view.

So far it’s been our experience that Honolulu has much more night life than Kailua, but so far our favorite beach was in Kailua.

Since we’ve been in Honolulu, we’ve been having a blast chilling by the beach swimming and exercising during the day and hitting up Happy Hour at the YardHouse in the afternoon. 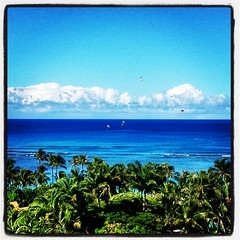 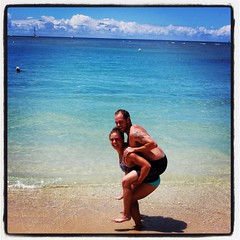 Doing partner squats at the beach! 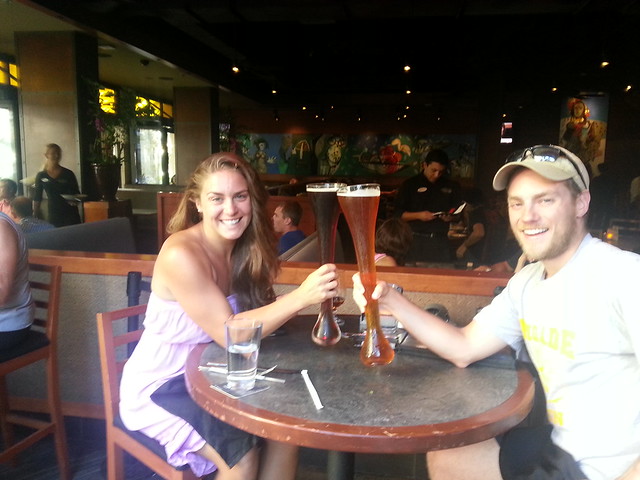 Cheers to you all! We miss you!

That sums up this past week.  I can’t wait to report what the next week brings! 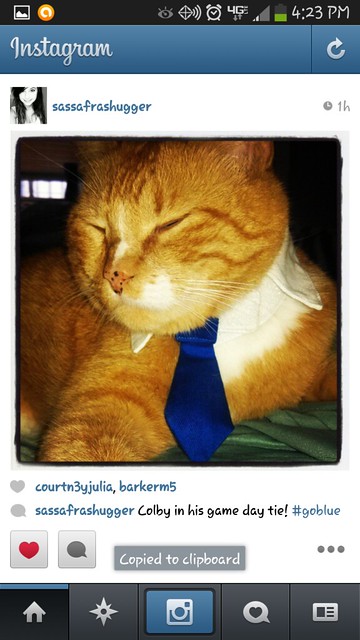 Shout out to Colby Jack and Mary getting their college education in Ann Arbor. I believe it was Colby’s Lucky Game Day Tie that sealed the Wolverine’s Win last Saturday!