I know I don’t normally post until Thursday, but Tom and I did an awesome hike on Saturday that I couldn’t wait to share with you! 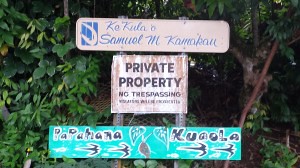 We hiked what is called the Stairway to Heaven or Haʻikū Ladder.

This hike can be tough to do as a tourist.

First of all the Hawaiian Government has made it hard to access.  The trail head itself is about 3/4 of a mile from the gated entrance in Kaneohe.

Second there is a guard who stops people from hiking.  He works from 4am to 4pm to deter tourists who don’t know what they are doing.

Luckily we had a local who hikes up about every other week volunteer to take us up.  She not only knew the hours the guard would be there, but also the best way to get to the trailhead. 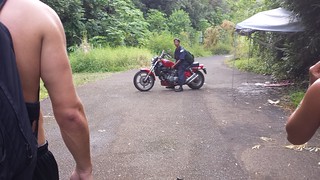 Now for those reading who are starting to to wonder if we really should have trespassed I want you to know we got there about 10 min too early (3:50pm) and ran into the guard at the bottom of the trail head. 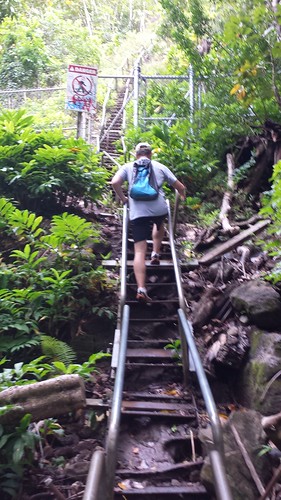 He just laughed and said, “Wow you know what time I get off!  Be safe!” as he drove off on his motorcycle.

After the guard drove away we began  our ascent up the stairway to heaven.

The hike is sectioned off into 5 different platforms, but the first section is by far the worst.  In fact on the way down we ran into a couple who despite our encouragement only made it to the first platform because it was so intense.

If you do make it to the first platform you are rewarded with an amazing view. 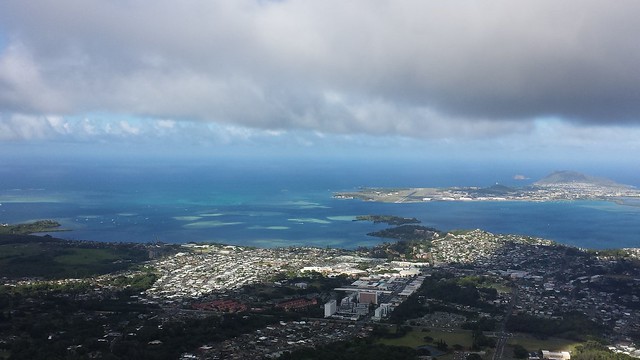 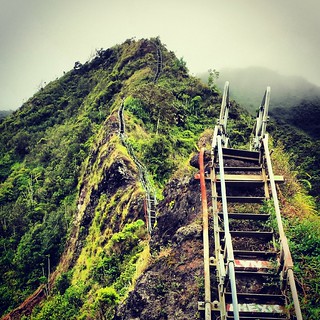 However, after pausing for a about 5 minutes to take some pictures and drink some water we looked up and saw we still had quite a bit of work ahead of us.

Luckily the next couple platforms came much quicker than the first.

Unfortunately, shortly after the 1st platform we also hit the clouds so the view was never quite as good as it was at the first platform.

Our pride wouldn’t let us stop though, we were determined to reach the summit. 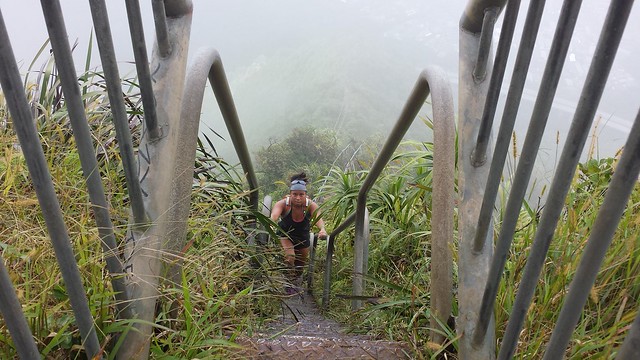 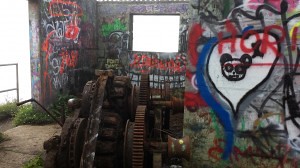 Inside the shack at platform 2.

Platform 2 is deceptively encouraging.  You see a large shack that is platform 2 from the first platform.  Thinking the shack must be the summit you think you are much closer to the top than you actually are.

It is a huge let down to realize once you reach the shack that you have another set of stairs waiting for you.  They seem to never end!

We weren’t deterred, however, our eagerness to reach the top and the temperature drop had us quickly pushing upward!

As we neared Platform 3 we could tell we were getting pretty close.

We could see another shack just a little further up so we continued to push to the top. 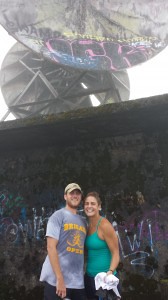 We hit the top in just about an hour.

According to wikipedia we covered 3,922 steps and had an elevation gain of  2,800 feet. 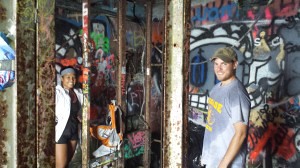 Tom and Leslie chilling to the shack at the top before we headed down.

This is no ordinary hike though, once you reach the top arguably the hardest part is coming down.

There are times when the steps are straight up like rungs on a ladder.  This wasn’t as intimidating on the way up as you face the hillside, but when you are coming down and looking off the into the huge valley below it can be a little more intimidating. 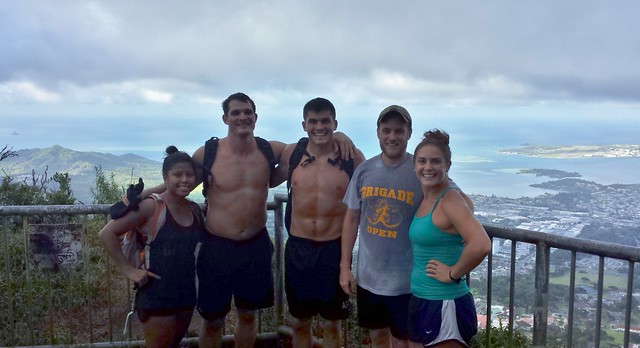 Our whole group safely back at platform 1.

We took our time and before we knew it we were already back to platform 1.

We reached the bottom roughly 2 hours after we started.  Legs shaking, we headed to Pearl Harbor NEX to load up on coconut water, vitawater, and celebratory beers!

2 Days later my legs are still feeling the climb, as well as my arms but it definitely was an awesome experience! 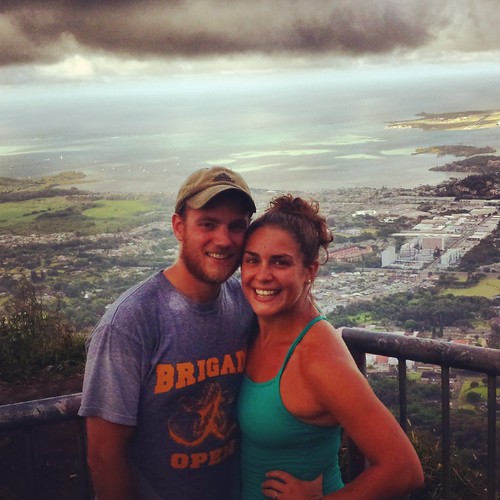 I can’t wait for what else this trip holds!