It’s almost been a month now since we left Washington.
This week marks the longest we’ve been in one place. 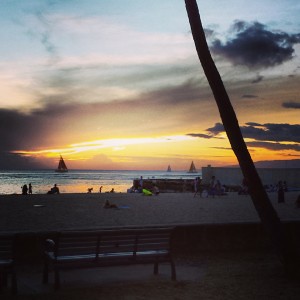 One of Tom’s and my’s goals during our travel is not only to see as much as possible, but also to immerse into the culture of where we are at and experience what it’s like to be locals.

Since I last wrote our lives in Honolulu can be summed up by the words Yoga, Pirate Ship, Sunday Funday, Acai bowls, and Sunsets.

Mary Jarvis is a senior Bikram Yoga Teacher and owns Global Yoga in San Francisco, one of the first Bikram Yoga studios.  She has been teaching and practicing for over 30 years, has trained 7 Yoga World Champions including the current male champion Jared McCann, and has the reputation in the Bikram community for being an all-around bad ass. 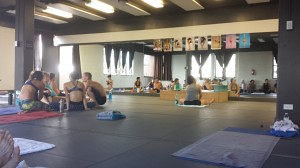 Waiting for posture clinic to start after Mary Jarvis’ Class.

I was super excited when I heard she would be doing a workshop in Oahu while I was in town!

The workshop lasted 2 days Saturday and Sunday.  It consisted of class followed by posture clinic both days.

Saturday class ran other 3 hours, and Sunday it was closer to 3 1/2 hours.  Both classes, while physically demanding were equally calming and relaxing.  It was definitely an awesome experience! 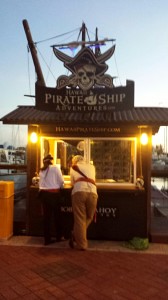 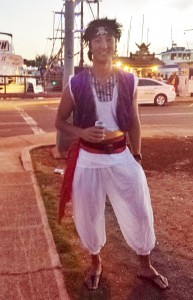 Saturday night following the Mary Jarvis workshop, Tom and I joined Chris and Mike on a pirate cruise of Waikiki.

Straight out of Pirates of the Caribbean we rode the open sea with pirates and our mateys.

I’m not quite sure if true pirates listen to rap and pop music, but it was definitely a good time. 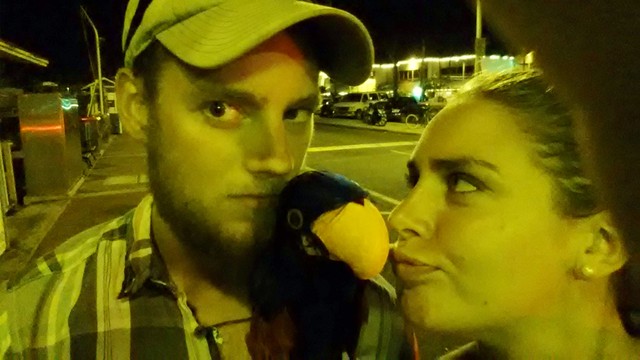 Tom and I chilling with our Parrot.

Following the workshop on Sunday I came home to find the boys getting ready to go to Duke’s for Sunday Funday. 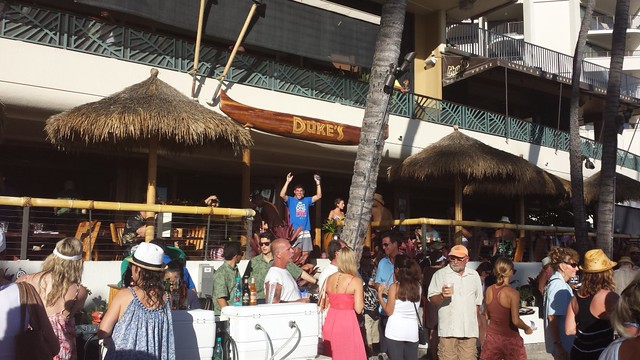 Chilling at Duke’s. Can you spot Mikey?

Apparently, it isn’t Sunday in Honolulu without making an appearance at Duke’s Barefoot Bar. 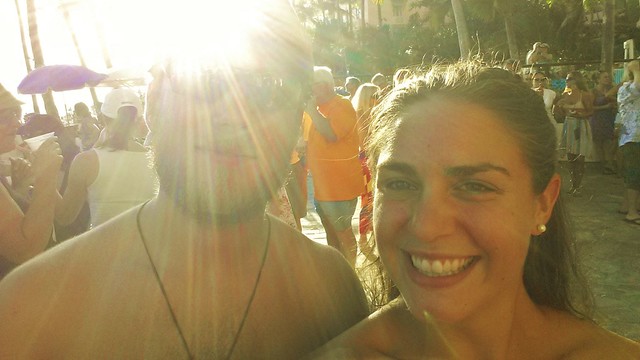 Tom and I enjoying the sun and a beer on the deck at Duke’s! 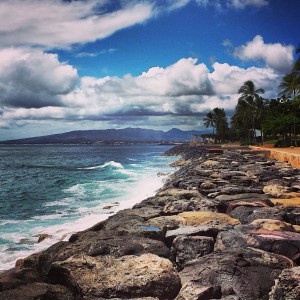 Between yoga workshops, pirate ships, and Sunday funday; Tom and I have been making time to run along the beach.

It’s best when we are able to get out earlier to beat the heat, but our bodies are starting to adjust to being able to run in the hot Hawaiian sun.

My favorite path is the picture to the right along the rock barrier.  It has amazing view both for the down and the back… 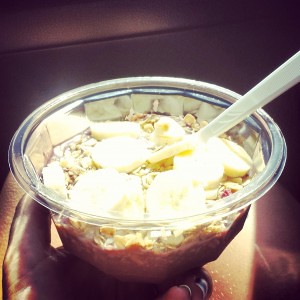 …Although most often the back usually has us cutting back into the city to get a yummy Acai Bowl to refuel.  It may not be the best at helping us stick to our macro-nutrient ratios, (They are pretty Carb heavy.) but they are yummy and from my research I’ve found the Acai Berry to be nutritious enough to justify a refuel as long as we run there!

The best bowl that I’ve found oddly enough is in the Ala Moana mall at Blue Hawaiian. 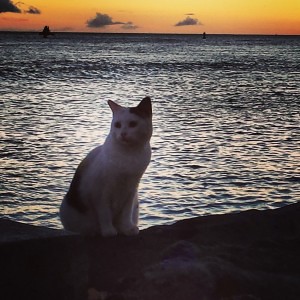 One consistent event Tom and I have enjoyed in Honolulu are walks to the beach at Sunset.

The local park near Chris and Mike’s house, Kaka’ako Waterfront Park, not only offers a beautiful view west for the sunset, but is also littered with kittens that live in the rock barriers and bushes. 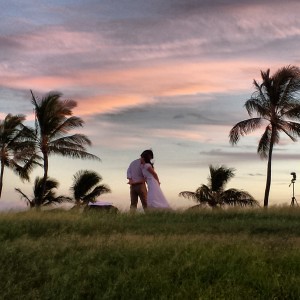 Kaka’ako also attracts many brides daily at sunset for their wedding photos. One day we saw 7 brides there are at once!

View from the top of Diamond Head

Tuesday was our last day in Honolulu.  We woke up early to catch the sunrise on the top of Diamond Head in South Waikiki.

Diamond Head is one of the dormant volcanoes on Oahu and was utilized as a lookout for the military in WWII. 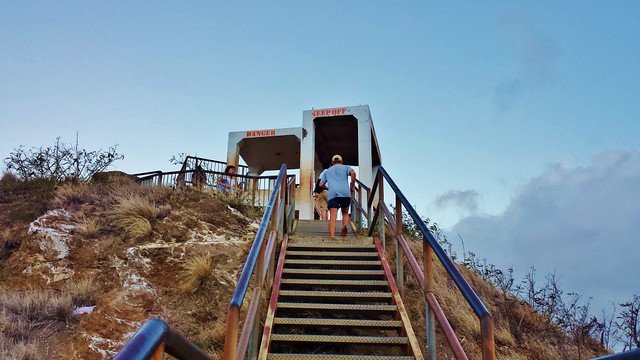 We arrived at 6am and were able to run to the top to beat the swarms of tourists who had the same idea we did. 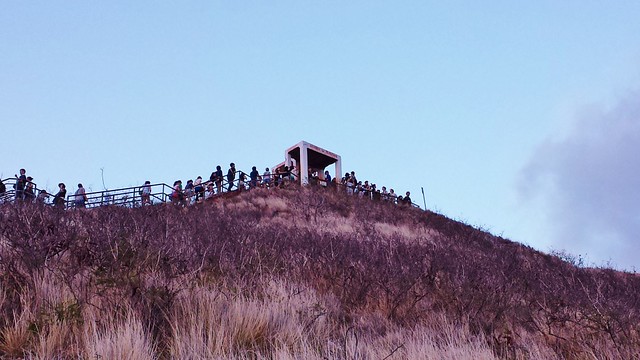 All the tourists arriving at the top as we were heading down.

This “hike” was a pretty easy one.  It was about 1 mile uphill, but was nothing compared to the Stairway to Heaven Hike that we did the week before. 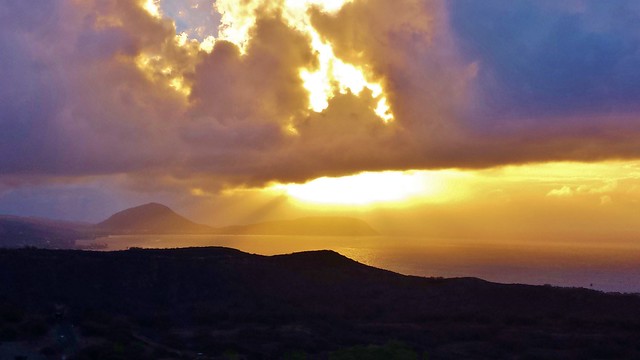 Sunrise at the top of Diamond Head 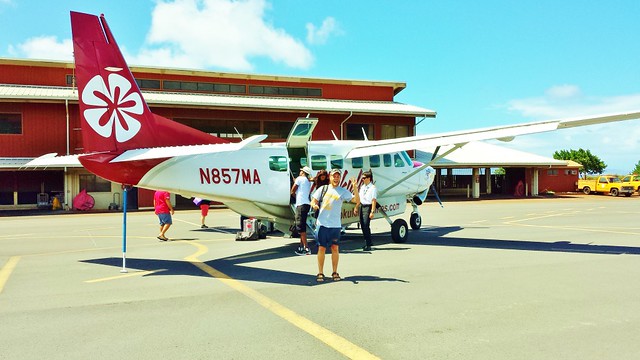 After our hike we quickly packed up and headed to the airport to catch our island hopper to Maui. 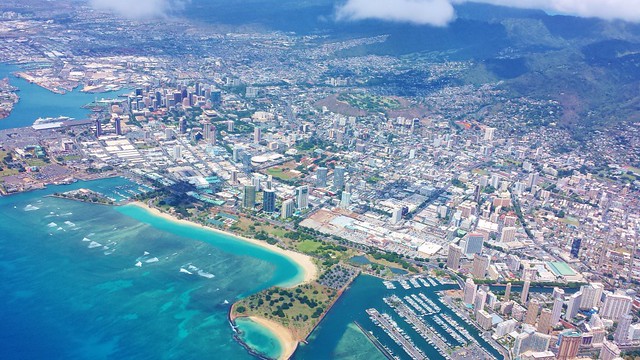 Waikiki from the air on the way to Maui 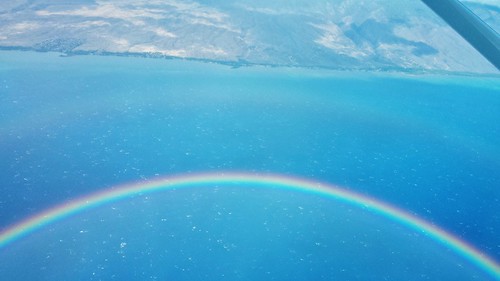 A rainbow that surrounded us for most of the flight.

This is the part of the trip where we learned a little lesson.  We accidentally booked a ticket to Kapalua the northwest end of the Maui, rather than Kahului, the middle of the island.

Luckily for us, this lesson had few repercussions and actually worked to our advantage.

We wouldn’t have gotten to ride in such a small aircraft if we had flown into the main airport. 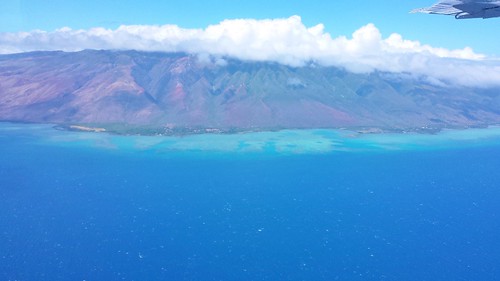 View of Moloka’i as we arrived into Maui

I had never flown in such a small airplane and not only was it an awesome and slightly terrifying experience, (I quickly learned smaller air crafts have a much more bumpy ride than large air crafts, especially on the landing.) but we were also able to get much better views.

For those who know my guilty pleasures, you know watching reality TV specifically The Bachelor/Bachelorette series is one of them.

As we were landing and I had a death grip on Tom’s hand, I took the opportunity to quote a a cliche line from the show and whispered to Tom, “Just think, if we survive this plane ride and make it to where we are supposed to be, it’s a sign that our relationship can overcome any challenges thrown our way!” 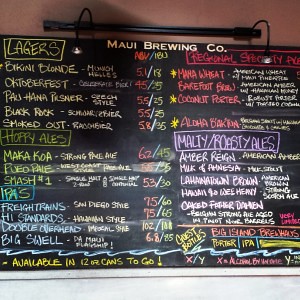 Beer selection at Maui Brewing. My favorite was the Aloha Baktun!

Obviously we survived, and we not only made it to where we were supposed to be a couple hours late by bus, but we also got to kill time and grab lunch at Maui Brewing!

We were planning to head out to Maui brewing later in the trip, so our little mishap not only saved us money on tickets, (tickets to the main airport were $96 a piece, our little island hopper was $98 for both) but it also gave us an opportunity to ride in a small aircraft, take some awesome pictures, and sample some tasty brews without the long drive!

We definitely lucked out this time, but we are still using the experience as a learning lesson to double check spellings for any other plane, train, or bus trips we may take in the future–especially once we actually get abroad.  Yet another good reason to start any long trip in your home nation before heading abroad!

View from my Aunt’s House. We are getting spoiled quickly!

Today I woke up early and caught a gorgeous sunrise with the Harvest moon before heading into town to teach and take Yoga at Bikram Yoga Maui.

The studio had a new flotex floor…kind of a big deal in the Bikram world.  If you are ever in the area I recommend stopping in. 🙂 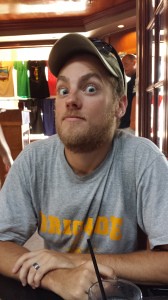 Finally before I sign off I wanted to remind you of the competition Tom is doing.

He is growing his beard out for the remainder of our trip (or until he gets sick of it).

If you have a guess as to how long it will be by the end, (longest hair from the tip of his chin to the end of the hair) leave your guess as a comment.

The closet guess will win a cool prize!  Happy guessing! 🙂