We’ve been on Maui for a week now, staying in between the upcountry in Kula at my Aunt Julie’s house and down on the beach at my cousin Robin’s in Kihei.

Last week I wrote about our little mishap getting over here. 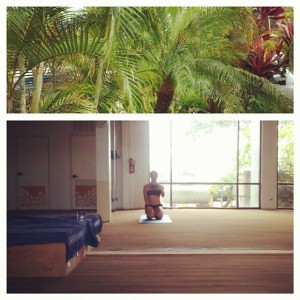 The time in Maui has since gone flawlessly.  (Getting around is very easy when someone so generously lets you borrow their car!  Thank you Robin!)

My teaching gig last Thursday turned into an opportunity to also teach Friday and Sunday!

Bikram Yoga Maui has a great population of regular yogis.  I highly recommend checking it out if you visit Maui!  The energy there is awesome!  I was grateful to have experienced this Bikram community! 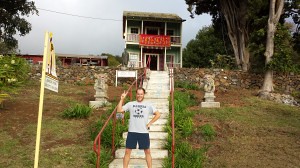 Running upcountry in Kula is definitely different than running along the beaches of Oahu.

There are a ton of hills, in fact you can’t really find a run without hills.

Therefore, Tom doesn’t mind obliging me to stop and take a picture! 😉

Friday night we headed down to Kihei.  (Or Kihell as the upcountry folks like to call it.  It is much hotter down in Kihei then it is up in Kula!) 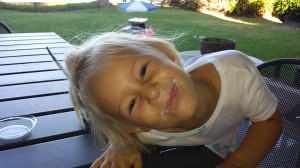 We BBQ’ed Friday night with my Cousin Robin’s Family.

We enjoyed a weekend with the Kean’s in Kihei living Island Family Style.

I got lots of steps chasing Pippa around, while Tom had ultimate Ninjago style Battle Royals with Thatcher. 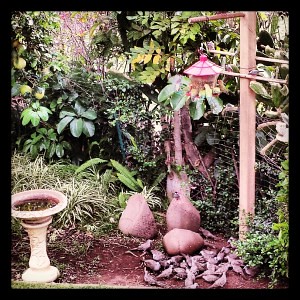 We were told by our friend Hope that we had to check out the wild Lovebirds of Maui.

Luckily, one of the places to spot them happens to be in my cousin’s neighborhood. 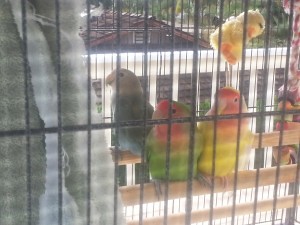 The man who runs the facebook page Wild Lovebirds of Maui very generously invited us over to his home to view the birds at feeding time.

Don’t let the name fool you though, they will be vicious when it comes to feeding time. 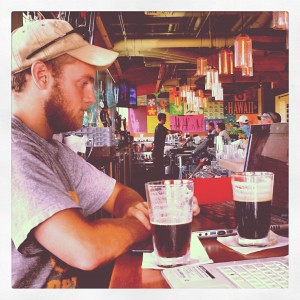 Each night in Kihei the sunset was amazing.  We were in Maui at the perfect time of year to catch the sunset sink at the southern most tip of Lana’i.  (Where we got to go snorkeling later in the week!)

We have been doing some pretty normal things since we’ve been in Kihei. 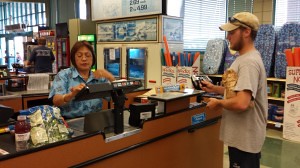 Saturday we posted up  in MonkeyPod, a restaurant with WiFi, yummy wings, and a great beer selection to get some work in.

We also hit the grocery store to buy food.  While the official language of Hawaii is English, we’ve found sometimes there is still a language barrier. 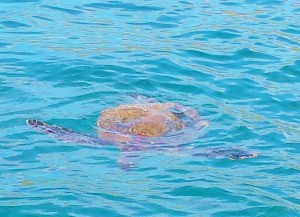 Tuesday we got to go on the Ultimate Snorkeling Experience!

It was a blast!

The first thing we saw as we set out on a giant yellow innertube motorboat from Lahaina Harbor to Lana’i was a bay with Sea Turtles.

We saw 3 total and one even swam right up to the boat. 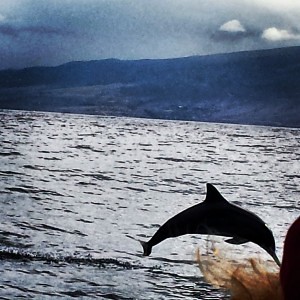 We learned very quickly that Dolphins are not shy.

The more we cheered them on, the more flips and tricks they would do!

Once the boat had had enough of the Dolphins, we continued our adventure to the Western coast of the Lana’i to snorkel.

I wish I had pictures to share of the amazing colorful fish we saw. 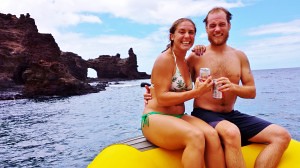 A Diet Coke had never tasted as good as it did coming in from a a dive! 🙂
Thank you so much Kathy! We had a blast!! 🙂

The trip did make me finally bite the bullet and buy an underwater camera.  Our GoPro should be arriving in the mail tomorrow so we should have some sweet shots to come! 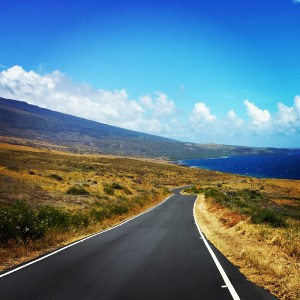 Wednesday night we drove out to Kaupo.  A hunting ranch on the East side of Maui.

Getting there was a haul.

We drove down miles of windy road.

Luckily most of the road was along a beautiful coast! 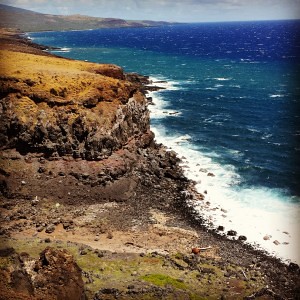 As we neared the Ranch, the windy road turned into a bumpy dirt and gravel road. 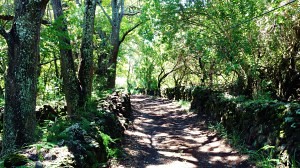 Luckily, we’ve had a monster truck since we’ve been on Maui!   It may not get the best gas mileage for all our excursions, but it definitely gets us to remote areas of the island! 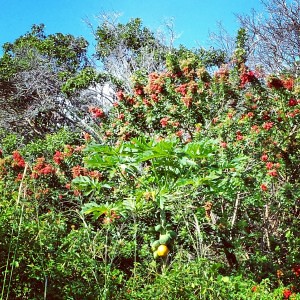 After we unpacked our bags we went on a two hour trek throughout the property.

We were amazed by the acres and acres of lush green land overlooking the ocean.

The best part of the trek though was definitely running into some wild pigs and a huge buck!

We settled in for the night after our hike.  Unwinding with some beers from Maui brewery we had picked up in our hydroflasks, Tom got some good reading time while I made dinner. 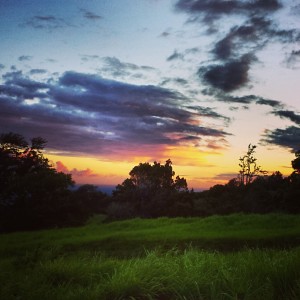 After dinner, we  enjoyed being cut off from the internets for an evening–I know super rare for Tom and Courtney!

Instead of blogging, facebooking, or watching Revenge on Netflixs; we instead played cribbage.

This was Tom’s first time playing.  While he did catch on quickly, I gladly can report I did win.  The good news is we now have a game to last us the rest of the trip.  I know Tom will not let me continue to win! 😉 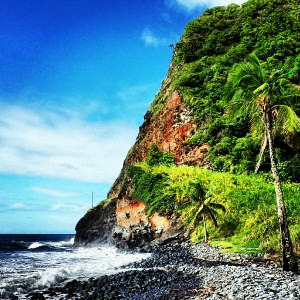 We woke up today (Thursday 9/26) and put Robin’s truck to good use once more as we continued around the Southwest tip of Maui towards Hana.

While windy and narrow, the road offered gorgeous oceanfront views of lush greenery and waterfalls! 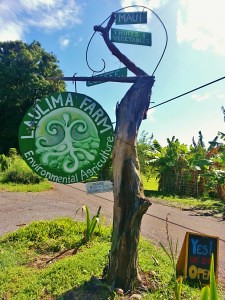 The best part of the day may have been the hippie Co-op we stopped at to get coffee.

Located a mile from Haleakala National Park driving from Kaupo, (mile marker 41) this little fruit stop is a gem.

The coffee was delicious and I was able to get my first taste of real coconut water! 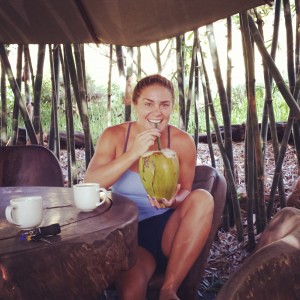 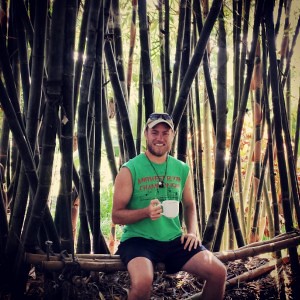 For someone who drinks canned coconut water close to daily, this was a HUGE treat!

Tom and I enjoyed our coconut water and coffee in a bamboo hut sitting at a table where the table and chairs were carved out of one gigantic tree trunk.  The pictures don’t do it justice.

We lingered just long enough to a catch couple stories from the locals who live on the farm.

It was their day off.  They only work 3 days a week. 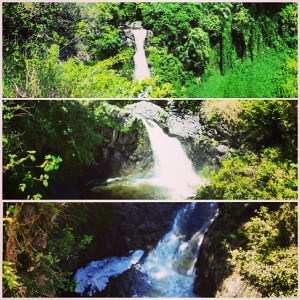 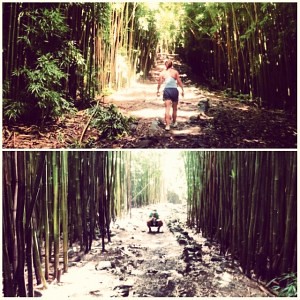 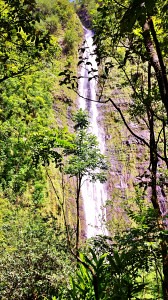 A mile down the road, we parked at the Haleakala National Park to do the Bamboo Forest Hike.

This hike was a moderate one.  A little longer than Diamond Head and still nothing compared to Stairway to Heaven, my fitbit told me I walked 12,325 steps and 81 staircases.

The hike took us a little over an hour.  We got to hike through some beautiful bamboo and see multiple waterfalls.  The entire trail is along a river that has many waterfalls, the tallest one being the end of the hike.

The one bummer about doing the Bamboo forest hike, is no matter which direction you come from (unless you are lucky enough to hitch a helicopter ride!) you still have a long drive back!

The main road to Hana is about an hour and a half of windy roads (luckily paved this time!) with many one lane bridges.  Since this is major tourist attraction, the ride home can seem to go on forever as you stop at each bridge to let opposing traffic by.

Luckily for us, while windy and long, the road back from Hana was just as pretty as the ride there!

I was super excited to have been able to drive from the opposite direction and do a complete loop rather than doing the road to Hana there and back!   (Once again another perk of having a truck.  I wouldn’t recommend going much past Haleakala National Park without 4×4!) 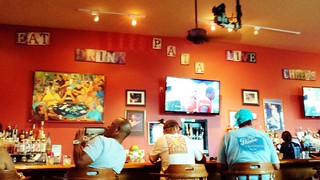 We made it back to civilization or at least a place with WiFi in time to post up, watch Thursday night Football, (Go Niners!) and for me to post this blog from Charley’s in Paia.  After we finish up here, we’ll head to the Fish Market for a yummy dinner before we head home for the night.

Once again, we’ve had another great week.

We hope everyone is doing well at home. 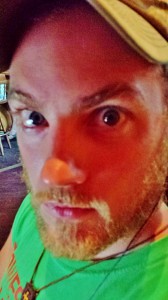 Tom apologizes for not posting this week.  We’ve been on Hawaii time and Sunday seemed to just come and go.

We didn’t get many guesses on how long Tom’s beard will get….just between you and me he asked me if I wanted him to shave it when we get to New Zealand.

I said he should keep it as long as he wants…or until we return to the United States!

How long do you think it will get?

How long do you think it will last?

Leave you guess and any other comments, concerns, or questions below!