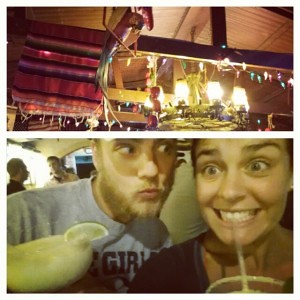 We wrapped up our stay on Maui shortly after I posted last week.

Friday we had a pretty chill day, taking some time to enjoy the peace and quiet as well as beautiful view at my Aunt Julie’s before heading down to the historic town of Makawao.

We posted up in Stopwatch Sports Bar (the only restaurant that had WIFI) to allow Tom to get a little more work done.  Luckily for us it was happy hour!

When we wrapped up work, we headed to Polli’s a local Mexican Restaurant.

We had to wait about 30 min for a table, but it was definitely worth the wait and the margaritas were amazing! 😉

Watching our bags waiting to load the plane.  Can you spot our blue and black backpacks?

Saturday we headed back to Oahu arriving in time to have a family style dinner with our Honolulu friends at Bucca di Beppo.

Chris the family just wasn’t the same without you!  Hope you had a good trip back to the mainland!

Sunday morning we woke up for one more exciting American football Sunday morning before we headed abroad.  (My phone tells me the hawks game is at 6am Monday morning…not quite sure where I’ll be able to watch that!) 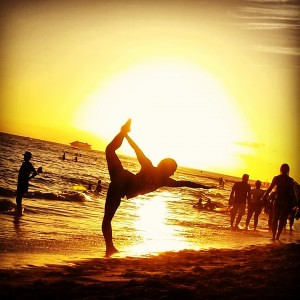 Yoga on the Beach after the Seahawks win!

I’m glad to say the Hawks pulled out a big win against the Texans leaving us 4-0 for the first time ever!  I guess yoga is working for them.  If it’s good enough for the Seahawks, it just might be good enough for you!  Just saying–If the Hawks win the superbowl I want everyone who follows us to go out and try a yoga class if you haven’t already! 😉

Obviously, we had to head to Duke’s on Sunday to celebrate!–Right Mikey!

As always the view was amazing.

After listening to some live music, we headed to our favorite spot, Duraku for Happy Hour.

Following Happy Hour, we hit up Wang Chung’s for Karaoke.  We sang so much, we had to head back to Duraku for late night Happy Hour!

Monday we began to regroup and get ready to head abroad.

After a busy day on Monday we woke up early on Tuesday so we could get one more hike in.

The gateway into Manoa Falls 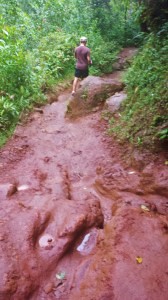 We headed to Manoa Falls for a short little hike.

Part of Jurassic Park was filmed here.  The hike was only 1.6 miles round trip.  (We only got 6,000 steps on our fitbit. 🙁 ) But did have some awesome scenery the whole way. 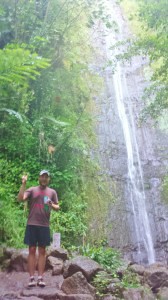 however still offered some crazy cool trees, vines, and wildlife along the way with a 150 foot waterfall at the end.

The coolest thing we saw, were once again some wild pigs cross our trail on the way up!  I wish I could have snapped a picture!

We finished up Tuesday running down to the waterfront to catch one more sunset. 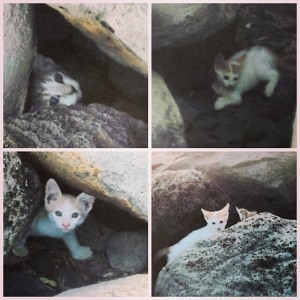 We were pleasantly surprised to find out the waterfront rock cats I wrote about earlier had kittens!

There were close to 20 little kittens running around and through the waterfront rocks very curious about all of us strange people hanging out watching the sunset. 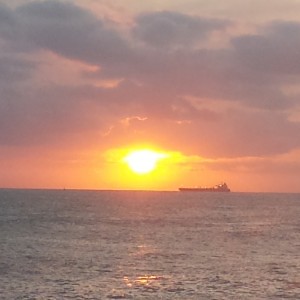 Wednesday we had a full day before we flew out at 10pm.  I was able to catch one more Bikram class at Hot Yoga Nimitz.

We spent the rest of the day finalizing all the important things we hadn’t done; such as alerting our credit card companies that we were heading abroad, closing out Tom’s cell phone account, buying our traveler’s insurance, making last minute phone calls

home, and of course getting one more acai bowl! 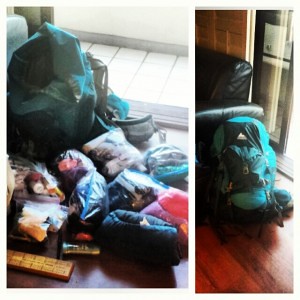 Final pack job before heading out, best one yet!

We arrived at the airport in plenty of time, just in case something went wrong.  Of course nothing did, our flight was even delayed so we killed some time at the airport before we finally boarded.

Air New Zealand was an awesome airline!  We both had free headsets and entertainment screens allowing us to watch the new Superman movie! 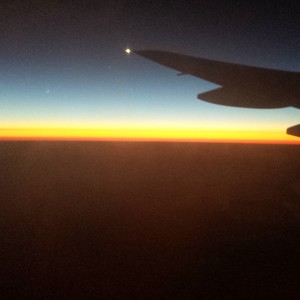 The sun coming up as we approached New Zealand.

Since our flight was a red eye, we both popped a sleep aid and attempted to get some sleep since we would be landing at 7am and had a full day of adventure ahead of us.

It worked for the most part, waking up only to change head positions and eat the meal service that was provided.

To our surprised we actually got two meals, a curry chicken for dinner and eggs and potatoes for breakfast.

These meals turned out to be a huge blessing, because it was definitely the last free meal we’ll be having for a while! 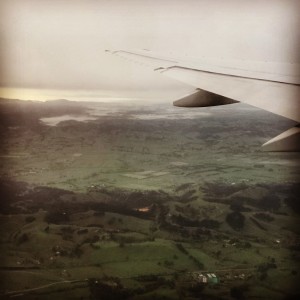 After landing, we quickly discovered how expensive meals are in New Zealand!

After landing and clearing customs, we caught the Airbus into Auckland. 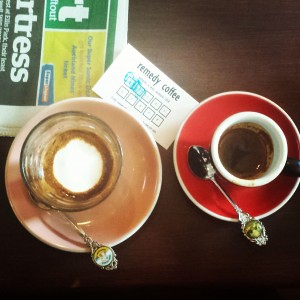 Not having any plans, we found the nearest coffee shop with WIFI and began making our plans.

We luckily found a hostel within walking distance and headed over to check in and unload our gear.

I say luckily, because we later found out every hostel and hotel had sold out this weekend because Rhianna is in town for a concert.–Who knew Rhianna was so big in New Zealand!

We quickly discovered that not only would meals be super expensive, (Subway was $8 for the cheap footlong, but most restaurants start around $16 -$22 for entrees such as burritos.) but finding good internet access would also be difficult as well.

Most coffee shops have MB restrictions on internet use (20MB-50MB) making it difficult to get much done.

To make matters worse, I got elbowed in the mouth and chipped my front tooth.  Luckily, from what I’ve found New Zealand offers great insurance (called ACC Accident Compensation Corporation) even to foreign travelers so I should be able to get it fixed Monday.  Please say your prayers and keep your fingers crossed for me! 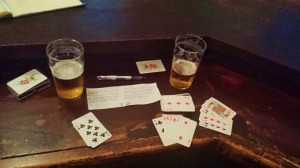 Giving up for the day, we found a Happy Hour pitcher of beer (just one!) for $18 (Most beers start at $9 a pint.) and played some cribbage to clear our minds. 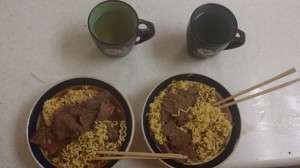 After our beers and game, we hit up one of the few grocery stores we could find and bought some beef and Ramon to make an affordable dinner back at the hostel.  (By affordable I mean $5.99 for Ramon and $12 for a little over 1/2 a lb of beef.)

We ended our first day here walking in a local park checking out the view.  Exhausted from the day, we crashed around 8 snuggled on the bottom bunk in our 10 bed hostel room.  (We did have two beds, but Tom agreed to snuggle! 🙂  Having a chipped tooth can work to your advantage!)

You’re probably starting to think we have a bad attitude and maybe shouldn’t be traveling, but don’t worry we got an attitude adjustment on Saturday.

After a full night of sleep, we awoke to a new day.  Our first success was we found an internet cafe we could connect to for a small price of $3 an hour per person.  It may not have been amazing, but was definitely looking up. 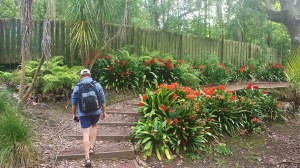 The day only continued to get better as we headed to Ponsonby Road where the Bikram Studio is! 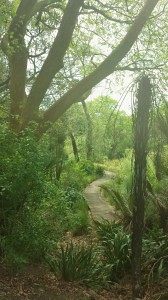 Walking through Western Park along the way we found an amazing park right in the middle of the city with beautiful wildlife!

We found prices on this street to be much more affordable as well as a coffee cafe with unlimited internet!!!!   Thank you Byzantium Cafe!  You are officially our favorite spot in Auckland! 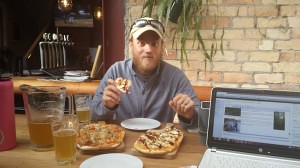 We stayed there until it closed and I’m currently posted up in Freeman & Grey (also with unlimited internet!) Enjoying a pitcher of beer (unfortunately $30) and waiting for our $4 happy hour pizzas! 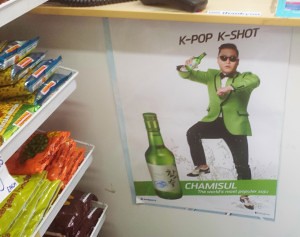 Mary this pic’s for you!

Tom and I both had our moments when we wondered what we were doing, but we just continue to remind ourselves that worst case we don’t stick to our budget and we have the rest of our lives to work off this awesome experience!

Please just do me a favor and go enjoy a HH drink for us!  We are quickly limiting our alcohol intake!

Just one more example of cost of living. Can you imagine paying $35.90 for Vogue???  American Vogue is a bargain at $23!